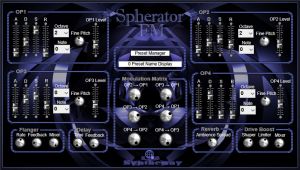 Spherator FM is a frequency modulation synthesizer to generate an eclectic spectrum of sounds, through a sine wave modulator oscillator that modulates the frequency of a sine wave carrier oscillator, by creating harmonic and inharmonic sounds.

It can be used to create spacey pads, synth leads, keys, basses, atmospheric textures and ambient soundscapes. Features a collection of 40 presets suitable for many genres and styles of music and flexibility to custom design over a diverse sonic palette.