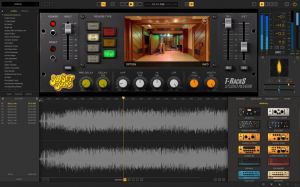 T-RackS Sunset Sound Studio Reverb is your chance to give your tracks this iconic sound and vibe, with a suite of convolution reverbs capturing the sonic mojo of each room, booth, chamber and plate, all using the original consoles of each studio and Sunset's own microphones. It's the next best thing to tracking your session in this hall-of-fame studio itself.

Step into a part of music history

Sunset Sound Recorders was opened in 1958 by Tutti Camarata, then director of recording for Disney Studios. Walt had no interest in owning a studio, so Tutti purchased and outfitted Sunset himself. The space's slanted floor and uneven walls gave it ideal acoustics, and soon the studio was busy recording Disney classics like "Mary Poppins".

I'm not that much into IK's recent offerings, but the Stealth Limiter and Sunset Sound Studio Reverb are notable exceptions. I'm using SSSR a ton lately. It's an efficient workflow with great sounding rooms, plates, and chambers.