Originally published by Sonic Foundry before changing hands and becoming part of Sony's creative software division in 2003 which now belongs to Magix Software, Sound Forge is a true veteran in the world of digital audio software and a staple on many an audio engineer's workstation. Sound Forge, now in its 15th iteration, turns 30 this year. From its humble roots as an audio editor, it now caters for professional audio recording and mastering, sound design, audio restoration, CD authoring, podcast production and much more.

Special mention must be made of the tutorial system included with Sound Forge Pro 15. In addition to the manual, upon loading up the software for the first time you are greeted with an interactive tutorial system which provides a very visual walkthrough of all the components, menus and windows and will have you oriented in no time. It may sound trivial, but coming from another audio editor / DAW environment, it can often be frustrating figuring out how to accomplish often simple functions and this mitigated that issue elegantly.

The UI is utilitarian at best and the interface could possibly do with a more modern overhaul from a visual standpoint. It is clean and functional though with a new dark mode being available in version 15 which seems to be the industry standard for creative apps these days. One of its strong suits though is the extreme amount of customization options on hand and its ability to adapt to a vast number of audio editing roles and applications. Any combination of windows can be docked fluidly across multiple monitors to create a unique work environment suited to the task at hand, or just grab one of the many workspaces presets to effortlessly jump from a mastering job to editing a podcast and everything in between. 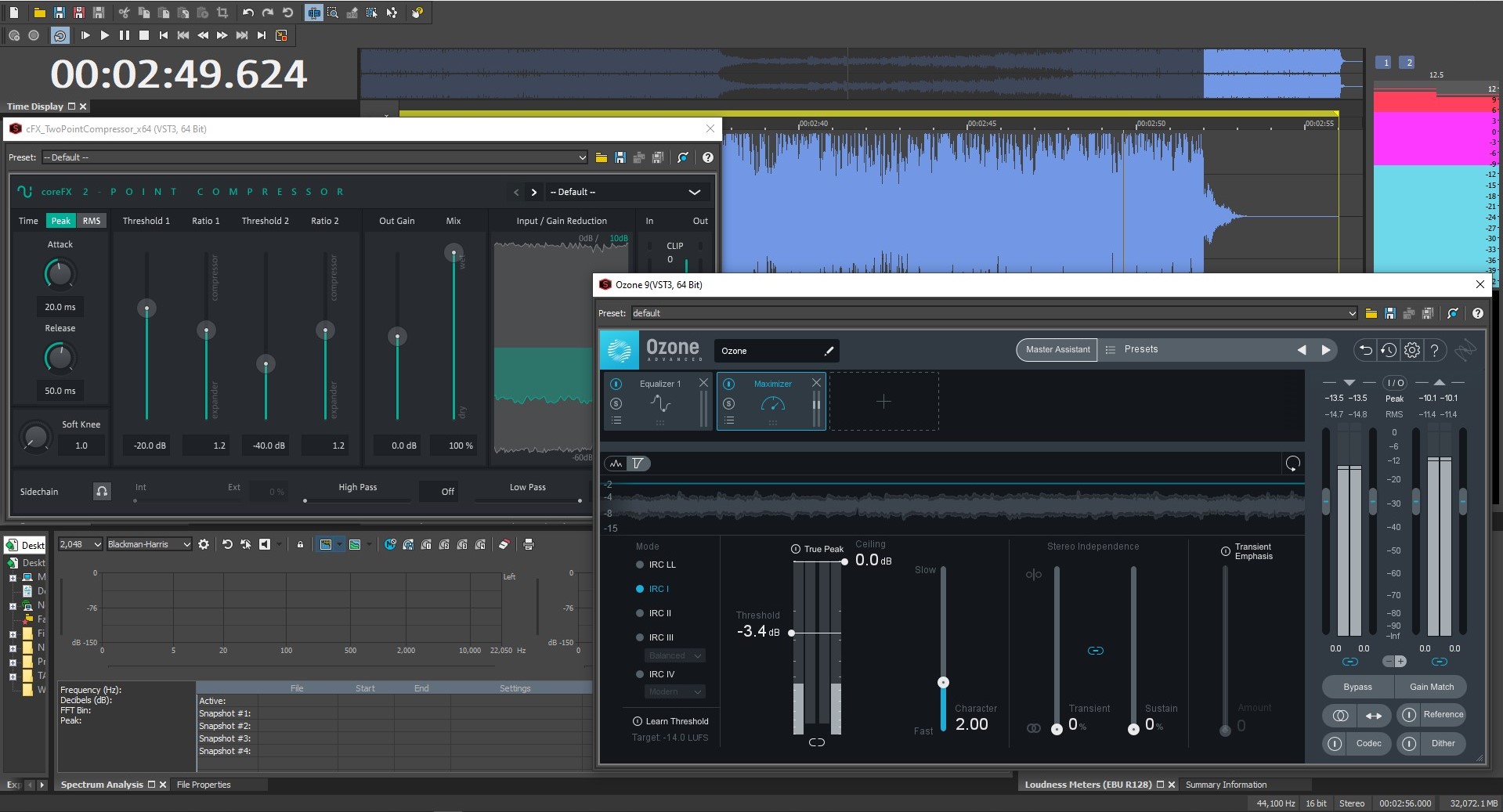 A fantastically useful new feature in Sound Forge 15 is the inclusion of a context menu extension (for Microsoft Windows) which allows for several functions and processes to be run right from within explorer and without even needing to launch the app at all. It was surprising to see the context menu also works on folders, effecting all audio contained within and allowing you to convert formats, normalize files, trim silence and more in record time. This made working with large amounts of multi samples and recorded hits for use in sample libraries an absolute breeze, with no time spent creating complicated batch processes at all, although that option exists too.

The loop tuner view was incredibly useful and an intuitive way to finely tune looped audio, be it beats or multi sampled instruments. Exported WAV's can have loop points embedded making Sound Forge a perfect partner for a synth such as Spectrasonic's Omnisphere 2, which has rather rudimentary sampling capabilities and really requires a partnership with an app like Sound Forge for you to fully take advantage of its sample engine. Sound Forge also supports SoundFont (SF2) files.

For podcasters and engineers working with multiple takes to a single file, there are some handy tools such as the 'Truncate Silence' option which can remove pauses in voice overs. The automatic region creation also makes quick work of identifying regions across a lengthy recording, allowing you to quickly jump to, edit and export specific parts of a file.

New in 15 are improvements to the 'Instant Action' functionality allowing you to create macros and shortcuts which are accessible from a single click and once again customizable per workspace. Again, this allows you to quickly tailor the app to do what you need it to without complicating the process at all.

Other new features include a reworked export experience. Export templates can be saved and in turn assigned to the afore mentioned 'Instant Actions' or even to the Windows context menu functionality in Explorer. Radio, streaming and television compliant masters are also now easily achievable via loudness normalization (not to be confused with a standard peak normalization process) and conforms to EBU R128 or ITU BS.1770-4 standards. An ACX export wizard is also included for users working with content for audiobooks on Audible, iTunes and Amazon. 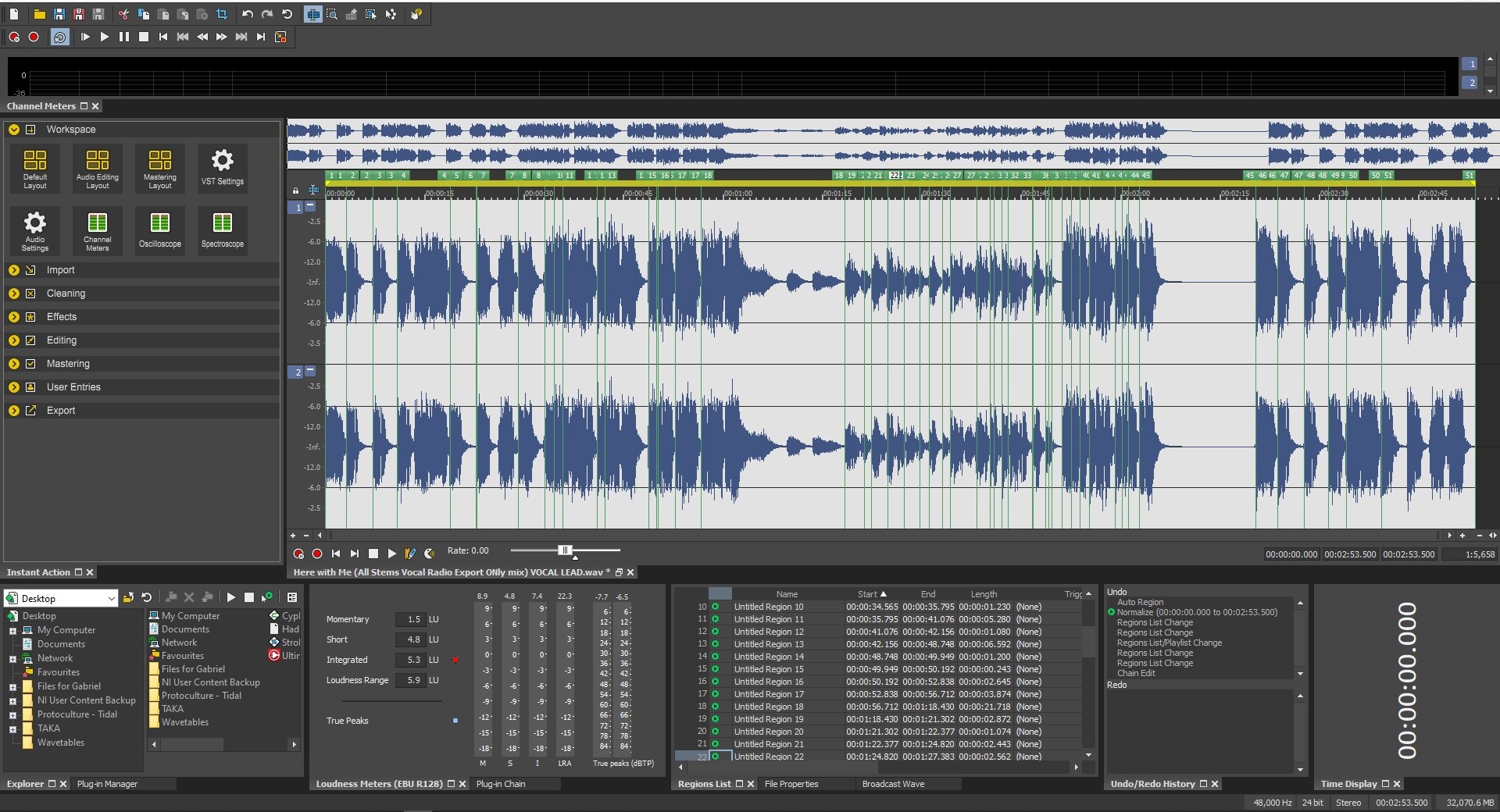 Bang for your buck

The bundled software that comes with the Pro and Suite versions of Sound Forge 15 is impressive and covers a lot of ground. You can get your feet wet with spectral editing with the included Spectra layers 7 from Steinberg as well as RX8 Elements from iZotope. Also, from iZotope, a selection of mastering tools in the form of Ozone Elements and a bundled version of Celemony Melodyne 4. ARA2 functionality is included for seamless integration between external apps. Although they're the light versions of their fully featured counterparts, all these inclusions provide an excellent set of tools and a springboard to some of the most well-respected audio editing tools in the industry. The value provided by the third-party software almost constitutes the price of Sound Forge 15 alone, despite the huge amount of tools it offers natively.

A healthy dose of VST effects plugins are included as well covering everything from modulation FX for sound design, to dynamics control, restoration and more. There is enough utilities here to cover you for almost any application from mastering, podcast creation and sample manipulation to simple clean up and restoration jobs.

The plugin chain did feel a bit awkward to use at times. A lack of a search function can make finding specific plugins on the fly a bit of a chore however you are given the ability to create custom folders with groups of plugins suited for specific tasks. It's possible to create a podcast folder for example and fill it with tools for removing plosives, compression suited for vocal work and whatever other tools you may require for the task at hand.

Sound Forge 15 contains an impressive array of industry leading tools for audio professionals of all types over the years. It is a 'Swiss Army Knife' of an audio app that every engineer, podcaster, sound designer and mastering engineer would do well to have in their arsenal. Most impressive is how easy it is to mold it to one's needs, excelling at specific tasks, achieving results, and doing so quickly and effectively without confusion or distraction. Spend a bit of time tailoring Sound Forge to your personal workflow and it will fit you like a glove.

At $399 for the Pro version and $599 for Suite, Sound Forge is an investment, however comparatively well priced considering the scope of the software. The bundled third-party apps and plugins more than justify the asking price and both versions are available on a rent-to-own model called '365'. Furthermore, should you only require a simplified set of tools, the studio version is available for $49 and contains many of the best new features such as the Windows context menu extensions.

What's that? I went to a site called Humble Bundle and don't see any reference to Sound Forge.

Sound Forge hasn't changed much throughout the years. A quick try of Auto Region and Auto Trim reveals they are just as useless in 15 as they always were.

It's really true. I used Sound Forge even before Sony bought it, and there have been only minor incremental changes over the years; particularly since Magix bought it. It is relatively stable and powerful, but simple things like being able to customize the GUI, having help features that actually work or contain information, and certain deeper dialogs that don't use the standard Windows format still rattle around in there. I mainly use it because I'm used to it, but there is no point in me upgrading every few months when just a few things are added.