Testing the softsynth waters - Interview with Amir Vinci from Waves

Founded in 1992 Waves was one of the first plug-in companies to deliver plug-ins for the Digidesign TDM System. In the last 20 years they have stretched the possibilities of effects processing while maintaining a consistently high level of quality. In 2010 they introduced SoundGrid, a networked audio-over-Ethernet solution (recently opened to 3rd party developers) that has found acceptance, especially in live sound environments. At the most recent NAMM show they announced DigiGrid, a series of products developed in a strategic alliance with DiGiCo. In early 2012 they received a Technical Grammy from NARAS, along with Roger Linn.

What follows is an email interview with Amir Vinci, who was kind enough to take the time. It's a long way from California to Tel Aviv so the interview was conducted by email.

Are you a musician? What drove you to join Waves in the first place?

Well, Music is life for most of us. My grandparents were classical musicians (Piano and Cello), I play guitar and other instruments and played with some local artists and bands, gigging and recording guitars for several albums, in recording studios with consoles onto 24channel 2" tape.

Back in the 80s I started providing services to the Multimedia (CD-Rom), gaming industry, Audio CD mastering and authoring, and was using a Waves application called WaveConvert to down convert my 16-bit 44.1kHz recordings into 8bit 11kHz or other low-res formats. I became part of the extended team just in time to beta test TrueVerb, which was designed by the late Michael Gerzon. Shortly afterward I was offered a full time job. I didn't yet know this will be the beginning of my main professional career. I still play and perform gigs with my band called "The Dry Bones".

How did Waves get into the plug-in business? What was genesis of the original idea? 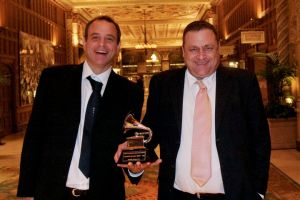 The two primary founders of Waves are Gilad Keren and Meir Shasshua. Gilad has a background as a recording and mixing engineer who had worked for Israel's studio tech legend Tommy Friedman. Meir was a hobbyist guitar player and music enthusiast. He was part of Talpiot program of the IDF serving as an R&D officer developing DSP algorithms and control software for an experimental radar system and remotely piloted vehicle.

They had an idea of making a real time EQ filter that would run on a Motorola 56k DSP chip. They developed the base algorithms for what later became the Q10 equalizer and C1 Compander to run in a rack mountable DSP hardware unit called the Paragon.

Gilad took a prototype to the AES show where he met with people from Digidesign who presented Gilad with the concept of 3rd party development integrating with their software as an add-on TDM plugin. The first big hit was the L1 Ultramaximizer, which was an amazing time saver for mastering engineers who used to have to zoom in and use a virtual pencil to chop off outstanding peaks in order to reach optimal level without clipping. The L1 made the process so fast and painless and the results far louder then they could achieve before and also better sounding due to a small "lookahead" making the transient of the dynamics process smoother.

When did you know that Waves was going to be a successful business? 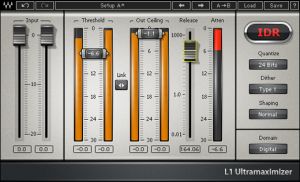 If I have to point out certain events that signify success it would probably be 1994 with the release of L1 which was the first hit product and then in 2001 when we moved from the old crumbling building in which we were located (we loved it none the less) to a modern high riser in the center of Tel-Aviv. This point signified the movement from being a small company into something a little more industrialized and this had several implications on the way we manage our operation.

What made you decide to create Element? What took so long?

A serious point that I would like to make is that we have a very big appetite for research and development at Waves. We love the challenge of setting a target and going after it and there's hardly any field within audio signal processing that we can keep away from. I find that every time we have slack we invest it is making more products, primarily for our pro audio users and also venturing into other related markets like consumer electronics and Live sound in the recent years. There are large amounts of R&D on products that went into the drawer at some point and we never came to produce, and in products we do produce we always learn new things and this drives us to make new/next generation products. This along with our personal fulfillment from using these tools is just so rewarding.

How is Element different from other softsynths on the market? 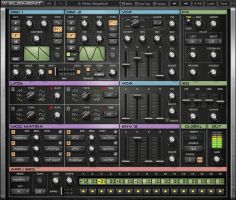 Well, it's not like all the others are the same. We put a lot of emphasis on the oscillator having a life of its own and I think Element has a sound and a tone that's alive. A unique cool feature that isn't as obvious is the Envelope Shape control that sets the envelope ADR slopes to be more – round, convex or more punchy, playing with these on the ACF envelope and VCA envelope opens a whole dimension of tone.

Otherwise, synths are cool and fun and your allowed to enjoy more than one. There's a bit of a synth festival and now revival of analog synths, but it seems there's place for many. Element is out there in its own right and with much respect to its legacy and ancestry and you can try it. It may just be your next goto. It's priced to go too...

Given the fact that Waves has up until now been exclusively an effects plug-in company, where does Element fit into the Waves world going forward?

Waves is an audio gear workshop that specializes in audio DSP mostly software and plugins and we hope to keep at it, but also expand into other fields. Now that Element is out and about I think we are going to have to give him a brother. J.

What goes into making a new software product? How do you decide what to do?

The Product Manager is the central hub between the users, engineers, marketing, management and eventually sales and tech support. The core team for a plugin project is usually the product manager, research (algorithmic) engineer and software engineer. The process goes through several stages from conceptual idea through technical proof of concept using non real time and probably inefficient math just to affirm viability and confirm the theory, product definition, design and development of basic native algorithm, GUI design, algorithm closure, optimization and DSP code development (for TDM systems) and technical closure. Typical modeling projects take about 1 year to develop by a team of about 3 dedicated team workers, supported by more extended team players working and managing the different aspects.

The actual specifications result from different concepts and requirements i.e. in modeling projects the features are almost predefined by the hardware being modeled, but in other products the innovation comes from combining technology with ergonomics and decisions on a products focus whether it's meant to be super flexible and micro controlled, or a product that does a little less but provides a solution that anyone can use successfully.

What can people expect from Waves next? What process do you go through when developing new products?

We want to extend our efforts for the more novice users, some of which were exposed to musical production directly on their computer without ever seeing a real pro recording studio, console or tape machine and sometimes don't adapt to common studio practices like aux send/return setups. Our artist signature plugins help such users and even more experienced users get to a starting point that will help them reach a better mix faster. Sometimes, these products surprise me too, In the last project I mixed the Maserati Drum plug-ins I opened on the recorded set ended up in the master mixdown after a failed attempt to replace them with my tried and true procedures. Apart from that… well, some products that are not plugins but do integrate with digital audio systems for an added value and improved experience.

In all of these, people can expect Waves to maintain a high standard of quality and reliability.

Given your long history is there any advice you would give to other developers?

Well, first, this is not a get rich fast industry, or get filthy rich at all. You have to love it and have a genuine interest in it. The most important asset is the human resources and in this respect there's two important things to remember.

Hire talented people that have some personal linkage to music and sound, this will make them work with better dedication and motivation. Develop good communications within your organization and allow people to feel respected and appreciated.

If you feel on top, don't take it for granted and try not to grow bubbles that may blow. If you do feel on top of your game but that this may be a temporary bubble, try to live in the lower 3rd of it rather then the very top.

Keep a healthy balance between short and long term planning and be ready to deal with changes as they come.

Listen to your customers with respect, even if they don't seem to treat you with equal respect, the opinion they state is an opportunity to learn something, but don't expect to make everyone happy all the time.