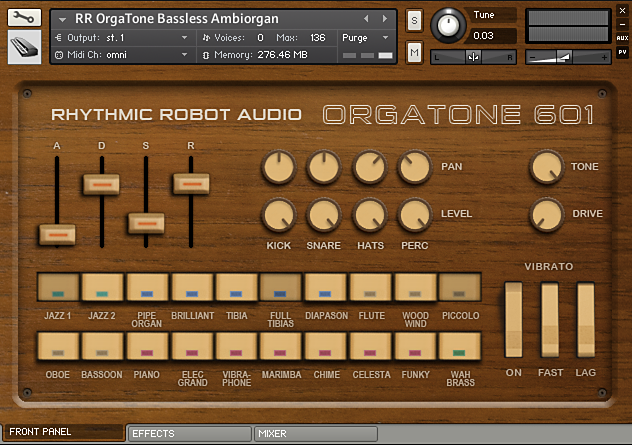 What is it?
Vintage OrganAnalogCasioCasio CZChilloutFarfisa Combo CompactJazzKontakt InstrumentLoungeNu JazzOrganOrgatone 601Rhythmic RobotTransistor Combo OrganVintageVintage Drum MachineVintage InstrumentsVintage KeysVox Continental
Format(s)
Operating System Availability
Audio Demos
Orgaton 601 Kontakt Instrument DemoOrgaton 601 Cheese Demo
License & Installation Method
Voucher / Code for redemption on other website
Tell Me More
Important Note
Requires a FULL version of Native Instruments Kontakt version 4.2.3 or higher (all versions of Kontakt 5 supported). Kontakt Player is NOT recommended and will time out after 15 mins or so. PLEASE MAKE SURE YOU HAVE A FULL VERSION OF KONTAKT BEFORE BUYING, AS WE CAN'T GIVE REFUNDS FOR SOFTWARE BOUGHT IN ERROR!
For related news items, downloads and more please see the full KVR product page for
Orgatone 601

We've sampled amazing, expensive, state-of-the-art machines like the Emulator II and the Roland Jupiter 6, but sometimes what a track calls for is something a little more basic, a little more humble in its origins. Think soundtrack to Napoleon Dynamite. Think home keyboard. Think cheese. Think Casiotone.

Orgatone 601 is a loving and not at all post-modern-ironic version of the godfather of Casio's home keyboard range, the Casiotone 601. This was a surprisingly big instrument, with full-sized keys, inbuilt rhythms, and onboard speaker (of course!) and a touch-sensitive nudge-bar that you could use to trigger the rhythm fills. This relied on skin to make it function, and was situated on the left-hand front edge of the keyboard, so if you wanted a fill-in rhythm pattern while playing with both hands you really needed to be wearing shorts and hit it with your knee, but... whatever. It sounded neat, kinda.

The onboard rhythms are firmly boom-tish in their capabilities, and all of the onboard presets are effectively variations on pulse waves of various widths, though some all-analogue transistorised wizardry manages to sculpt these into modern and classical organs, keys, various flavours of woodwind, and even what Casio optimistically called "wah brass". So, what does all that add up to?

The answer is, a real slice of nostalgia. The sounds are utterly of their time: late 70s lounge is definitely their comfort zone. That said, the Jazz organs in particular we really like: they're soft and warm and would sit very nicely in all manner of chillout styles. Dial up the dirt and add some bite with carefully-chosen woodwind stops, and you can get a passable punk transistor sound. Reggae gets a good look-in too, courtesy of the keys and organ tones, which are spot on for chunking away on the off-beat of your Bob Marley covers.

We've recreated the whole thing, right down to the fake wood veneer and the little plastic pushbuttons, though we've added some extras to help you get the most from it: kit pieces are adjustable and can be played separately from the preset rhythms; there's envelope control, of course; and plenty of useful effects to get your creativity going. There are also 65 rad factory patches in there.

Who starts their keyboard career with a Jupiter or an Emulator anyway? Just like the Boss DR 55 was (officially) everyone's first drum machine, we're willing to bet most people's first keyboard experience had Casio silkscreened on it somewhere. Relive those glory days and Vote for Pedro!