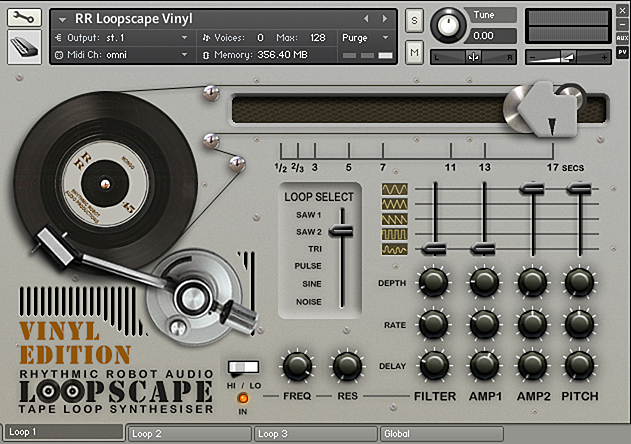 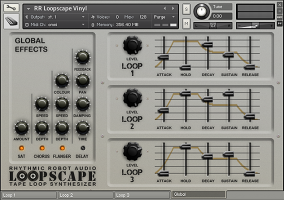 Loopscape Vinyl is a loop-based synthesiser inspired by experimental musical pioneers of the 60s and 70s like Brian Eno. Eno created ambient music by combining tape loops of different lengths to create non-repeating, infinitely-varying compositions. With our original Loopscape, we took that concept and turned it into a tape-loop-based synthesiser. Loopscape Vinyl applies the same process to deliberately-aged custom-pressed vinyl records instead of vintage tape loops.

At its most basic, Loopscape Vinyl offers the user three virtual vinyl loops which can be run simultaneously. Each of these can be loaded with any one of six classic analog waveforms, and each can be set to run for between half a second and 17 seconds (in non-regular intervals). Each of the three virtual loops can be independently sculpted by a high / low pass resonant filter with LFO, and three further LFOs which control amplitude (twice) and pitch. Five LFO wave shapes are available, including a random wave. Although the controls are simple, the complexity of the underlying loops, plus the modulation, means that a single note played by Loopscape Vinyl will not repeat its sonic fingerprint for thousands of years.

Every component sound within Loopscape Vinyl was recorded onto custom-pressed vinyl dubplates. The waveforms themselves were sourced from analog synthesisers and were deliberately chosen for their irregular sonic character. These waves were then resampled using a variety of vintage turntables, including a 1960s Dansette, a 1920s hand-cranked phonograph, and an 80s-vintage reference table. The dubplates were also deliberately abused, warped and scratched to introduce further irregularities into the loops.

Loopscape Vinyl requires Kontakt version 4.2.3 and above (including Kontakt 5). Kontakt Player is not supported.

I'm impressed. Gimmickry aside, this is a quirky, analog-sounding VSTi that is capable of creating strange, imperfect but instantly useful sounds. And it's cheap. I guess they could add a few more loop sounds but considering the price, it's kinda great as-is.