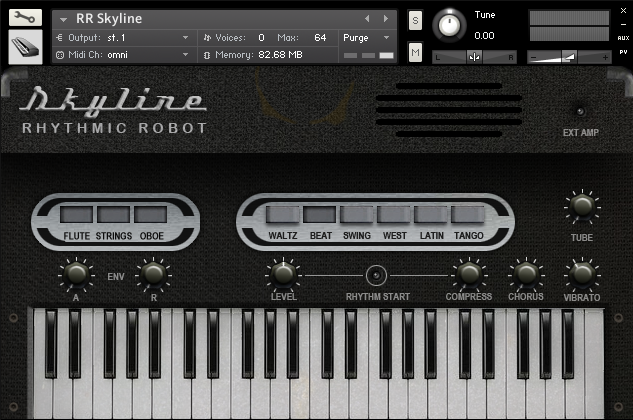 What is it?
Transistor Combo OrganAnalog Drum MachineColour OrganDrawbar OrganDrum MachineDrumsFunky OrganKontakt InstrumentOrganRhythmic RobotSamplesSkyline
Format(s)
Operating System Availability
License & Installation Method
Voucher / Code for redemption on other website
Tell Me More
Important Note
Requires a FULL version of Native Instruments Kontakt version 4.2.3 or higher (all versions of Kontakt 5 supported). Kontakt Player is NOT recommended and will time out after 15 mins or so. PLEASE MAKE SURE YOU HAVE A FULL VERSION OF KONTAKT BEFORE BUYING, AS WE CAN'T GIVE REFUNDS FOR SOFTWARE BOUGHT IN ERROR!
For related news items, downloads and more please see the full KVR product page for
Skyline

The Skyline was an early 70s analog keyboard-and-rhythms combo machine with 3 combinable keyboard tones (giving it a grand total of 7 sounds) and six preset analog rhythms. It was a strikingly designed instrument, with a contoured and bevelled matte black case standing on twin columns attached to a pedestal base. The casing also housed an amp and twin speakers, which helped to take the edge off the transistor sound and gave the Skyline a surprisingly sweet, warm tone.

Rhythmic Robot's sampled version of the instrument samples all of the tones and their combinations, ensuring that combined tones sound exactly as they do on the original Skyline (rather than recreating them in Kontakt). It also contains the Preset Rhythms, which have been sliced and are fully sync-able to host DAW tempo – and also combinable for some pretty weird multi-rhythms! In addition to the Preset Rhythms there are individual kit piece hits for the rhythm tones, which have been multi sampled and are triggered randomly to avoid machine-gunning.

Skyline incorporates some carefully-chosen effects processing right from the front panel, with Compression and Level controls for the Rhythm section, and Tube saturation, Vibrato and envelope Attack and Decay for the keyboard sounds, plus a lush Chorus. Although the original Skyline was mono, the sampled version includes a subtle stereo spread from the low notes to the highs. Output can be run through an amp cab simulator for an extra "live" feel.

Available now from Rhythmic Robot: requires Kontakt version 4.2.3 and above (including Kontakt 5). Not compatible with Kontakt Player.