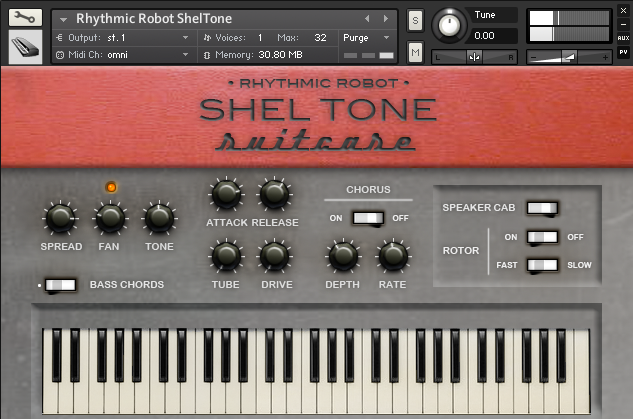 What is it?
Reed OrganDrawbar OrganFunky OrganKontakt InstrumentOrganPump ReedsReedsRhythmic RobotShelTone Suitcase
Format(s)
Operating System Availability
License & Installation Method
Voucher / Code for redemption on other website
What does this mean?
Important Note
Requires a FULL version of Native Instruments Kontakt version 4.2.3 or higher (all versions of Kontakt 5 supported). Kontakt Player is NOT recommended and will time out after 15 mins or so. PLEASE MAKE SURE YOU HAVE A FULL VERSION OF KONTAKT BEFORE BUYING, AS WE CAN'T GIVE REFUNDS FOR SOFTWARE BOUGHT IN ERROR!
For related news items, downloads and more please see the full KVR product page for
ShelTone Suitcase

ShelTone is a sampled electric reed organ. The original ShelTone 226 was sampled twice, once chromatically across its four-octave keyboard, and once for its Chord and Bass buttons, which work rather like accordion buttons to produce bass notes and full chords. The bass button samples have been integrated with the keyboard samples to extend the four octave original range considerably further, while the Chord buttons have been spread across two octaves and made switchable.

A switch on the Kontakt interface front panel switches between a full keyboard mode and a "split" keyboard, with key tones to the right and chord buttons spread out across two low octaves. This makes it easy to access the Chord sounds, which, because they use different reeds to the keys, have a subtle tonal difference.

Adding to the versatility of the instrument are controls for envelope attack and decay, plus cabinet simulation, Leslie simulation, Chorus, Saturation and Distortion effects. The electric fan noise of the original instrument has been sampled separately and can be either switched off completely or blended back in to taste. Stereo spread of the sound is also controllable.

The ShelTone Suitcase is ideal as a left-field alternative to Hammond tones. It can sound either like a traditional reed organ -- i.e., much like an accordion or melodeon -- or can be driven hard to produce a more raucous, indie rock set of sounds. It is available from Rhythmic Robot now for £4.95.

In My Cart!Magnus
Reed Organ by Rhythmic Robot$9.00