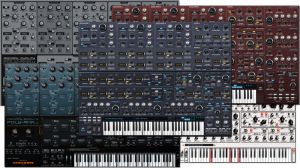 Admiral Quality has updated Poly-Ana and L'il Poly-Ana to v1.31. These are the final results of the years AQ spent back in deep-development working on the 1.30 Beta series.

Version 1.31 includes a completely re-worked Anti-Aliasing feature, now enabled on most of the built-in presets. This feature works in either/or combination with the built-in oversampling (via the Quality control) that Poly-Ana's always had, allowing you to highly customize the sound quality vs. CPU performance of your patches.

The other major addition from this recent Beta is the ability to create your own Custom Skins for the full version of Poly-Ana. Don't care for Poly-Ana's built-in interface graphics? Now there's a selection of many choices and you can even make your own.

To help celebrate Poly's rejuvenation, all products are 50% off for a limited time.