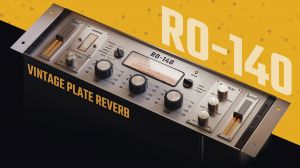 The RO-140 was faithfully modeled after its hardware counterparts, while still remaining a Black Rooster Audio original plug-in at its core. Its plate simulation approach allows users to authentically capture an analogue unit's sound and feel as closely as possible while still including some unexpected twists.

Achieving the perfect amount and type of reverb for your tracks can make - or break - your mix. Producers now have the ability to mimic any space in their mixes by using this effect, tricking the ear and simulating everything from grandiose width to cosy intimacy. Today's music production uses reverb processors extensively and with ease, but it hasn't always been this way.

Engineers have experimented with foil and metal plates to reproduce costly reverb rooms since the 50s, and while the result sounded good, this technique proved to be time-consuming, expensive and unpredictable. Nevertheless, plate reverberation was extensively used across many 50s and 60s hit songs.

A plate reverb's original purpose was to emulate reverberant rooms, but the hardware versions that followed have become legends themselves.

The difference between a classic vintage piece of hardware such as the EMT 140 and most modern, purely impulse response based plug-ins is very apparent to any good ear. This is why Black Rooster Audio has physically modeled not one, but six plate reverbs to create the RO-140 - offering maximum authenticity as well as a few unexpected twists.

This versatile plate reverb plug-in allows you to take your productions to the next level by uncovering a new level of detailed audio customization. Not only does it capture the sound of sought-after hardware classics, but it also allows you to create your own sound, with a virtually infinite amount of combinations between plate materials and plate sizes, dampening and pre-delay controls.