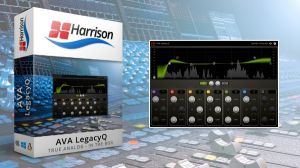 The new AVA LegacyQ is a plug-in version of Harrison's original MPC digital equalizer. It began life as a digitally-controlled analog circuit and was later adapted to digital while being used in high-end post and film facilities worldwide.

Like the original, the AVA LegacyQ is optimized for use with control surfaces. Each band covers a limited range equivalent to its original analog counterpart, and the "Q" shape is designed to optimally match the operating range of a physical knob.

Harrison Consoles' AVA LegacyQ is available for the introductory price of $49 through September 15 (Reg. $89).