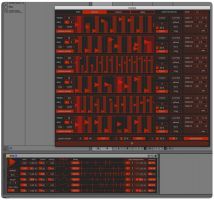 K-Devices has released ESQ, a Max For Live MIDI tool designed for the generation and advanced manipulation of patterns and beats. A new addition to the K-Devices Out of the Grid (OOG) series, ESQ is based on several sound synthesis techniques, adapted to a standard step sequencer to deliver new flexibility.

ESQ is a 6 track sequencer, with the ability to trigger up to 12 notes. The user can set an exclusive number of steps for each track (up to 16), while all tracks maintain the same length. The advanced random functions of OOG devices, extensive copy and paste of parameters as well as the ability to trigger multiple notes and edit up to 2 sequences per track, allows for quick, complex results. A primary and secondary note can be set per track, using a chance factor allowing ESQ to trigger one note or the other. Engaging the Lock Primary Note function, ESQ will then only add the secondary note choice according to the variable chance factor.

The device is composed of two sections, the ESQ main device itself and an external steps window. The external window contains a unique step sequencer that provides control over velocity, chance and relative delay for each step, providing immediate visual feedback. The user can focus on writing sequences in this external window as a first step, then deeply twist the parameters within the ESQ device, leading to unexplored sequencing territories. Sequences can be edited by hand, or by local and global advanced random functions and can be recalled by remote control, or again, by chance.

Each sequence is driven by an audio ramp, allowing it to twist, squeeze and scale the sequences as never before. Each sequence can be individually processed with exclusive parameters, and using the global and local ratios one can stray far from the main grid, all while staying in sync with Live's transport, to quickly and safely jump or transition back into the grid when desired.

ESQ can be used in multiple ways: use it for in-the-grid beats, add some OOG power to inject small variations, or go wild with out-of-the-grid madness. Notes and sequence chance features allow ESQ to play for long stretches while never repeating the same beat. Using slow tempos with synths or sampled sounds, can take ESQ into the ambient and generative collage realms.

"I wanted to make tools for users that want to go wild with time signatures, complex time, micro articulations, odd grooves, IDM and experimental music but are also versatile and easy to use, " commented K-Devices founder Alessio Santini. "ESQ offers a nice visual feedback of the sequences and unusual tools to process each track exclusively by moving, shifting, creating accents introducing breaks and deeply controlling the time."

ESQStep Sequencer
by K-Devices  49€
Add A Review My KVR