We are now in the download and voting stage of the KVR Developer Challenge 2012. This news item features an entry called Automathico by SirSickSik. You can download it for free here.

Here's what they say about it: 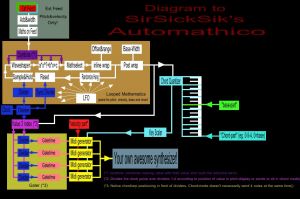 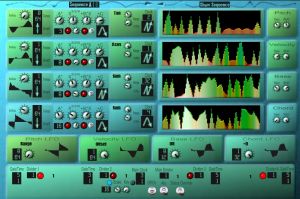 Automathico is a MIDI note generator based on looped mathematical calculations.

It's mainly build up from 3 parts: A fairly small knob-automation recorder which lets you internally automate knob adjustments, a bit bigger part is saved for the rhythmic section and the main part of the display is saved for knobs and selectors for the 6 (almost) identical sequencers. Two sequencers are for the main base (stable en-harmonic and chord (offset from en-harmonic scaled into the right scale and key).

The other four are for two separate sequencers for both pitch and velocity, so two different patterns can be created together following the same structure (enharmonics and chords).

These 6 sequencers are based on a sample&hold loop in which a series of mathematical calculations are put over the looping values. First a waveshaper, then a parabolic function and finally a math-algorithm like sine, tanh, power, square root. The sequencers all have their own clock-divider and sync-option to enforce recurring patterns and next to this the pitch and velocity sequencers have an extra feed option which allows to feed a value of another sequencer into it's loop via modulating math-functions. As last there is a dedicated LFO for each of the 6 sequencers to modulate one of the parameters, which, in different combinations can yield very interesting results as patterns evolve.

The rhythmic and melodic sections work together to assign the current pitch and velocity values to the note generators in arp-mode. When the switch is down, depending on whether the pitch-sequencer is playing between 0-25%, 25-50%, 50-75% or 75-100%, the most right, middle-left, middle-right, most right midi-note generators respectively will be triggered. As each of these can send on a different MIDI channel, each keyboard-range can be played by a different external synthesizer or sampler (VSTi or hardware).
Together this creates a very dynamic sequencer which can change the mood and rhythm with a single turn of a knob (if you turn the right knob for that of course).

You can use it to control both VSTi or hardware synthesizers or samplers (depending on the MIDI-routing capabilities of your MIDIhost, Cubase and Fruity Loops are for example known to do the job).

The new update has several bug fixes (also fixing Usine and XT crash) and several fixes of old values remaining from an old routing from the start of the development stage.. Also an extra feature is already build in, but will only show up after the contest automatically, so you don't have to download it again later on. This extra feature is, instead of the already build in single-knob record (only 1 knob-change each step, but is able to store these within the patch), a multi-knob record which is to be used when using the automathico in some sort of live-performance/recording.

Next to that, just have fun with it! My pleasure is making music and if I can share that pleasure, I am happy.