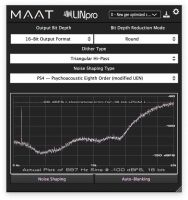 MAAT Incorporated has announced the re–release of a wholly rearchitected cross platform plug–in for the redithering of digital audio. While the new version represents the debut of MAAT's next generation of dithering engine, LINpro retains and improves upon its versatility and reference quality while enhancing the user experience.

Building on the foundations of MAAT's original LINearise plug–in, LINpro incorporates an all–new engine based on the current understanding of psychoacoustic, information theory and audio production best practices.

Although dithering is usually considered an automatic function that can be ignored without consequence, mastering engineers know that redithering prior to deliver is the last opportunity to define the quality of their product. In addition to the default Triangular PDF (Probability Density Function) dither needed for many delivery situations, LIN also includes High Passed Triangular PDF as well as seven choices for optimal Noise Shaping. Four of the options are derived from the most recent thinking in psychoacoustically optimized 5th, 8th and 9th order shapes from researchers including Gerzon, Craven, Lipshitz, Vanderkooy and Wannamaker. Rectangular PDF and word length truncation, while not recommended as production choices, are also included as educational and informative options.

For rapid identification of the desired settings, 8 bit output is available alongside 16 and 24-bit word lengths. To aid visually oriented audio engineers, actual noise plots of each dither type are displayed for any given setting. Factory presets also quickly steer the user to an optimal solution for any common delivery scenario.

Mastering engineer and MAAT co–founder Friedemann Tischmeyer is obsessed with a streamlined user experience. He comments:

With LINpro, we built a gorgeous, understated user interface to control our mathematically exacting dither engine. Out of the box, we also have made things easy with presets that address all common use cases, plus special settings to allow engineers to easily hear changes as they are being made.

Priced at $39, LINpro is available in all modern plug–in formats, including cross–platform AAX, VST 2 and 64-bit VST 3 as well as a Universal Binary 2 AU for macOS.

Perpetual licenses for LIN are available now, exclusively from MAAT. Additional information, including user manuals, are accessible anytime at www.maat.digital on the web.

Find LINpro in the KVR Marketplace