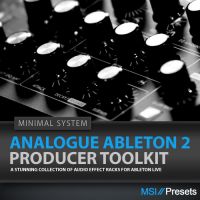 Minimal System Instruments says: "The Analogue Ableton series is designed so that the user has a highly usable suite of tools inspired and modelled on true outboard analogue hardware. The unmistakable sound of analogue is present in each one of the fifteen audio effect racks contained within this package."

The full breakdown of the racks included in this package: