"MOTU has received many requests from Pro Tools, Logic, Cubase, and Live users who wanted to get their hands on Digital Performer's MasterWorks plug-ins," said Jim Cooper, MOTU Director of Marketing. "Now they finally can." 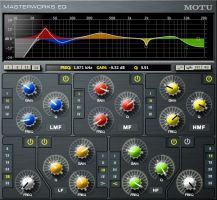 Users can apply up to five bands of EQ filtering, each with four EQ types that provide popular modern EQ styles and vintage analog EQ styles alike. Each filter type uniquely handles the dynamic interaction between Gain and Q. This crucial relationship has been modeled to emulate the smooth and musical character of classic analog EQ circuits, in which the gain/Q dependency was dictated by the actual circuit design and electrical components used. The resulting filter types exhibit versatility, from minor corrective tasks to highly creative applications.

Two mid bands include shelf filtering, and two outside bands provide variable slope low- and high-pass filtering. A full-width graphic display allows users to click directly on the filter control points for total control and visual feedback of the EQ curve being applied. Users can also view a real-time FFT display of the audio material being EQ'd to immediately see the effects of the filter on the frequency content of the audio.

The MasterWorks EQ has been carefully crafted and meticulously engineered to produce satisfying, musical results in a wide variety of applications. 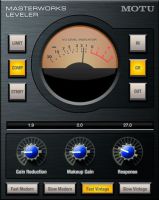 MasterWorks Leveler: Vintage Automatic Gain Control
The MasterWorks Leveler is an accurate model of the legendary Teletronix LA-2A optical leveling amplifier, known for its unique and highly sought-after Automatic Gain Control (AGC) characteristics. Conventional compression and limiting do not apply here: the heart of the LA-2A is the T4 opto-coupler, a photoelectric device with almost magical (signal dependent) self- adjusting behavior that has made the LA-2A the tool of choice for smoothing out just about any audio material, from vocals to bass guitar to full-program mixes, without destroying perceived dynamics.

Thanks to CPU-efficient performance, users can freely apply the Leveler as needed to the elements of their mix.

To ensure the accuracy of the modeling, the Leveler's software controls match the front panel of the original LA-2A hardware: Gain Reduction, Makeup Gain, and Response knobs, along with Limiter and Compressor buttons, plus an accurately modeled VU meter that adheres to IEC standards. The MasterWorks Leveler model is so accurate, users need to give the plug-in a minute or two to warm up and "settle in" to its fully operational state, just like the real hardware. A menu option lets users save the "warm" state, without waiting. 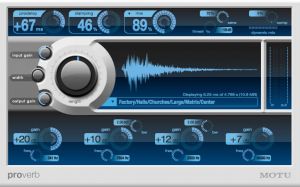 ProVerb: Realistic Acoustic Spaces
From soaring cathedrals to primordial forests, ProVerb is a CPU-efficient convolution reverb that delivers the sound of realistic acoustic spaces to any track or mix. Convolution is a process where the characteristics of a real acoustic space, such as a concert hall, sound stage or cathedral, are "sampled" (captured) and then faithfully reproduced, down to the last detail and nuance. Because it is sampled, not synthesized, convolution reverb is known for its realism, and it is widely considered to be the best type of reverb that money can buy.

ProVerb delivers convolution reverb with CPU-efficient performance and real-time parameter adjustment. Dozens of preset acoustic spaces (impulse responses) are included, from halls and stages, to plates and cathedrals. For many presets, a sub-menu provides different locations within the space. For example, the cathedral preset sub-menu lets users choose the alter, front pew, middle pew, or back pew. Many presets also offer left, center, and right positions, so users can spread different elements of their mix.

ProVerb's factory presets sound particularly rich and acoustically accurate because both the impulse responses (sampled spaces) and the ProVerb convolution engine process four separate channels for stereo processing: two channels (left and right) for the left side and two channels for the right side.

Users can simply drag and drop any standard audio file into ProVerb's waveform display to add their own presets. Many "impulse response" (IR) audio files can be purchased or downloaded for free on the internet. Any audio material can be used as an impulse response, often producing unpredictable and interesting effects appropriate for sound design applications.

ProVerb is heavily optimized so that all parameters can be adjusted in real time, even when modifying the impulse response waveform. What might take 10-15 seconds in other convolution products occurs almost immediately in ProVerb, as you adjust a parameter. Users can quickly sculpt their sound with predelay, damping, four bands of EQ, and wet/dry mix.