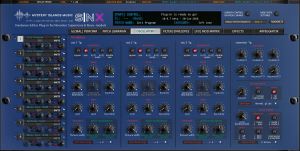 This new version fixes a lot bugs and non working functions of the plug-in since its beta release.

Here is what has changed: link to forums

The update is available now and is free for existing customers.