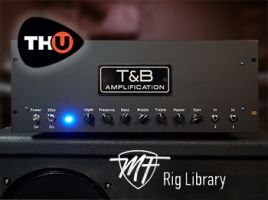 Overloud has announced the release of three new rig libraries from sound design and amp profiling experts Choptones and Live Ready Sound, along with a special artist pack from Marco Fanton for use in their guitar amp and FX suite TH-U. These three new rig libraries were introduced at the ILIO booth (Hall A, booth #11910) during NAMM with accompanying live demos from professional guitarists.

The new MF T&B 008 is the TH-U expansion library created by Marco Fanton that recreates the sound of an authentic T&B 008 Head built by the Italian boutique manufacturer T&B Amplification. The 008 is a single channel head that delivers a British style Hot Rod. The design is based on a British 800 circuit, modded to add a massive amount of gain with four KT88 tubes and four 12AX7 tubes.

The new Choptones Bogna XTC recreates the sound of a Bogner Ecstasy 101B. Born in the late 80s but brought to the market in 1992, the Bogner Ecstasy was the answer to all guitar players who needed a large palette of guitar tones without using multi-amp settings or multi-channel preamps. Reinhold Bogner discovered that the combo preamp/power amp couldn't deliver the correct dynamics and responses of a single circuit unit, so he created this multi-faceted amp. His mission? To give users the amazing tone of vintage amps.

The new LRS Unchained TH-U expansion library from Live Ready Sound captures the sound of an authentic Metropoulos DVL-1 head run through various cabinets, mics and speakers. This is a two channel, four mode amp that is a modern take on Plexis from the years 1965, 1966, 1968, and a hotrodded 1968.

In addition to the new rig libraries, ILIO will offer a special pack of TH-U tones as a free download to anyone who stops by their booth. Created by seasoned guitarist Ruben Reza and ILIO's own team of sound designers, this tone pack is modeled after tones from a variety of well-known artists in the rock, metal, country, and jazz genres.