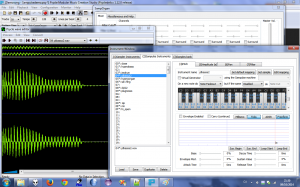 Psycledelics has announced that the public release of Psycle version 1.12.0 is ready for download.

Changes since version 1.10.1 focus on two key areas: Usage of sampled sounds, and a new Host that allows to build machines with the Lua language. It also contains a new Skin and other graphics, including a new icon.

The instrument editor has been completely redone, the wave editor has seen some improvements and the Sampulse machine is now completely usable.

PsycleTracker
by Psycle  Free
Add A Review My KVR