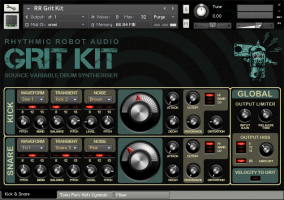 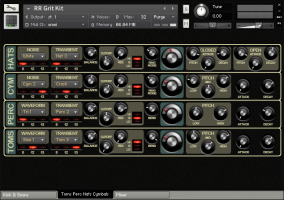 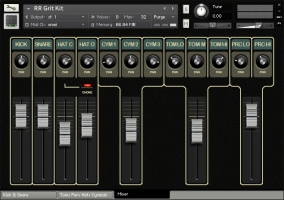 Rhythmic Robot have released Grit Kit, an analogue drum synthesiser with a twist: it puts the classic punchy sound of vintage hardware samplers right at the user's fingertips, with precision control over how much vintage character is added to the sound. It makes recreating old-skool producers' tricks of the trade as easy as turning up the Grit control.

At its most basic, Grit Kit allows the user to create entirely original drum sounds using sampled analogue waveforms, transients and noise, multimode resonant filters, attack and decay envelopes, and other typical drum synth controls. The difference that Grit Kit brings to this process is that every wave within the instrument has been recorded through the circuitry of three different vintage hardware samplers: the 8-bit Ensoniq Mirage, the 12-bit Akai S950, and the 13-bit Ensoniq EPS. These waves have been recorded over and over again using different settings of the source samplers, and pushing the input circuitry of those samplers harder and harder, allowing the user to dial in exactly as much hardware character as they want for their sound.

Creating sounds using Grit Kit is very simple, and adding "that" classic studio punch is now a matter of turning a dial rather than spending hours re-patching, resampling, and programming in hexadecimal. Grit Kit contains over 1200 sampled waveforms covering the full spectrum of the source samplers' responses, even to the point of including optional output hiss and noise. It allows you to create your own entirely customised, individual drum kits that have the sonic fingerprint of yesterday's hardware samplers built right in.

Grit Kit ships with 16 custom-built drum kits, covering everything from studio classic through analogue beats to sonic mayhem. It's available now from Rhythmic Robot and costs £34.95.

Grit Kit requires Kontakt 4.2.3 or later (including Kontakt 5). Not compatible with Kontakt Player.