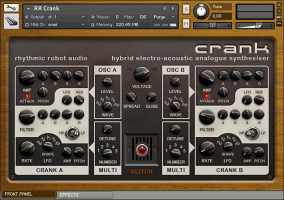 Rhythmic Robot Audio has released Crank, a hybrid synthesiser for Kontakt melding acoustic and electronic sources in a 4-oscillator architecture.

Crank takes over six hundred samples of an Eastern European stringed hurdy-gurdy – and places them at the heart of a four-oscillator analogue synthesiser framework ideally suited to the creation of strange, eerie, evolving patches.

The acoustic hurdy-gurdy produces its sounds by rubbing a rosined wooden wheel over a series of violin-style strings: the sound is half violin, half hand-cranked barrel organ and can be both plaintive and raw-sounding. Rhythmic Robot has sampled a hurdy-gurdy extensively to create the basic tones for Crank, and named the instrument after the handle that the player cranks round to make the hurdy-gurdy play.

The twin Crank oscillators are independently controllable, with dual filters, envelopes, pitch control, LFOs and so on; they also run in tandem with twin Analogue Oscillators, adding some classic analogue waves to the tonal palette. The characteristic attack "squeal" of the acoustic hurdy-gurdy can be turned on or off individually, and the sound sources mixed and blended to create haunting and evocative instruments that sound "almost real."

Price: £24.95 - Crank is available now from Rhythmic Robot at an introductory special-offer price of £19.95. Requires Kontakt v.4.2.3 or later to run (including all versions of Kontakt 5). Kontakt Player is not supported.

Find Crank in the KVR Marketplace