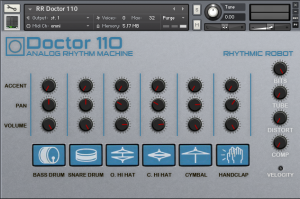 The DR-110 was a neat little analog drum machine from the early 1980s with six basic sounds, including a tight kick drum and some unusually metallic hi-hats. It was one of the earliest budget drum machines to feature an LCD to aid grid-based programming of patterns. It also featured an Accent control which could be applied to any kit piece.

The Rhythmic Robot Doctor 110 samples the original DR-110 at 24-bit, and samples each kit piece through the entire travel of the Accent control. This allows the user to set the Accent level on a per-kit-piece basis, either from the user interface front panel or via velocity, which makes creating humanised beats very simple. Further controls over the kit pieces include pan and level, plus a complement of effects including buss compression, Tube saturation, full-on Distortion and bit-crushing.

Doctor 110 is available now for £4.95. It is also available as part of a bundle offer with other Rhythmic Robot drum machines: see their website for further details.

Compatible with Kontakt 4.2.3 and above (including Kontakt 5). Does not support Kontakt Player.

Find Doctor 110 in the KVR Marketplace