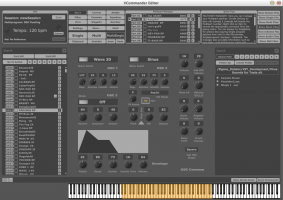 They've added a useful feature to lock patches from saving, which sounds simple, but actually has a big impact to live setups with host automation.

Together with the ability to act on incoming ProgramChange MIDI messages, Vcommander is now fully integrated in a live workflow.

VCommander is available in 32 and 64-bit versions for OS X and Windows. It runs as a VST or AU plug-in or standalone.