Sonic Charge has released version 3.0 of MicroTonic, the first major upgrade to MicroTonic in over five years. Sporting over 20 new features and a brand new look, MicroTonic is as good as new again. The upgrade is free for all registered users and it is 100% backwards compatible with earlier versions of MicroTonic (Except if you are running on a Mac PPC G4, as PPC G5 is the minimum requirement for 3.0). For new customers it costs $99 (+VAT).

Sonic Charge has also launched a new product called Bitspeek. It's an effect plug-in. It costs $29. It will make you sound like a robot. It's available for Windows and Mac OS X (Intel) in VST and AU effect plug-in formats. 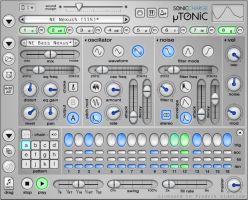 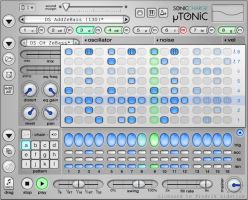 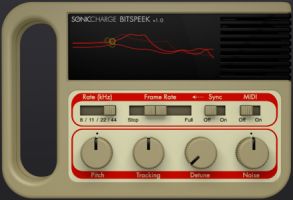 Bitspeek is a real-time pitch-excited linear prediction codec effect. Right now you are probably thinking, "oh, another one of those"? Or perhaps not. Chances are that you have never heard about "linear prediction", although most of us use it daily when we talk on our cell phones. Linear prediction coding is a voice compression technology that appeared in commercial products in the seventies and was implemented in some well-known speaking toys of the early eighties.

Sonic Charge applied this technology to create a VST / AU effect plug-in that analyzes audio, extracts a number of parameters (including pitch, volume and formant data) and then resynthesizes the audio using a simple oscillator, noise and filter architecture.

A number of playback parameters that adjusts the pitch and tonal quality of the sound as well as support for MIDI and a beat-synchronized "formant freezing effect" have been added. Despite having only a few simple controls, this box can produce a broad range of sounds from cheap speaking toys to high-end vocoder and talkbox effects.