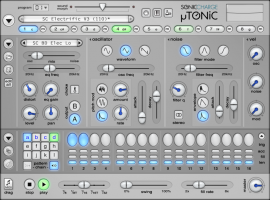 Sonic Charge has released version 3.1 of Microtonic, a free upgrade featuring 64-bit compatibility, new MIDI controlling possibilities (including pattern edits via MIDI CC) and a new skin with spacier layout and crispier pixels (There are several other minor improvements and bug fixes - see below).

One important addition is a utility called Authenticator that will help you register and unlock the Sonic Charge products you own by simply entering the logon name and password you have chosen for their website. An internet connection is required to do this, but in case you do not have a connection you can still register from within the plug-in with your name, email and registration key. Authenticator exists to help you, not to be a copy protection system.

With this release Sonic Charge are also consolidating their downloadable patch packages into a single installer. As a bonus, the installer contains a brand new package called Patternarium Stellar Beats Volume 1. It consists of the 100 most popular beats yet on their ever ongoing genetic experiment of Patternarium.

Bloody brilliant! Magnus is a legend.