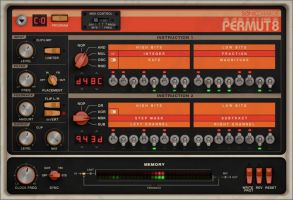 Sonic Charge has released Permut8, a new effect plug-in for Windows and Mac OS X that embraces the sounds of primitive digital signal processing hardware. It is programmable to produce a wide range of effects from traditional delays and flangers to beat-repeaters, bit-crushers and yet unheard of circuit bent madness.

At its core is a 12-bit digital delay with variable sample rate from 0 to 352 kHz. The delay is controlled by a programmable processor with an assortment of operators, allowing you to create almost any type of effect you can imagine and many more that you can't.

The input and output stages offers virtual analog components for saturation, limiting and filtering. The output can be fed back into the input to create echoes, comb-filter effects and never-ending chaos.

With Permut8 Sonic Charge have made a serious effort to make a plug-in that feels and sounds like a piece of physical digital hardware and not like your typical software effect. Permut8 can make aliasing noises that would make any Commodore 64 green of envy, but its aliasing is different from what you normally encounter in software DSP. For example, it is unrelated to the host sample rate and you can tune it exactly with the "clock frequency" knob. Furthermore, the components that should not alias, e.g. the "analog" saturation, employ heavy-duty anti-aliasing and oversampling techniques to avoid doing so. Permut8 has got just the right dose of hiss, hum, distortion and unpredictability to make it come alive without sacrificing fidelity when you don't want to.

The Permut8 user-interface might seem a bit intimidating at first. Make no mistake, this is complex machinery at work, but it is also a product that is designed for experimentation and happy accidents. The best way to learn the plug-in is probably to dive right in and start flipping those switches at random and then reading the reference section in this manual or turn to the built-in "Popup Help" for a better understanding of what is actually going on.