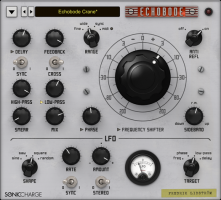 Sonic Charge has announced the release of the first VST and Audio Unit version of Echobode for Mac OS X and Windows.

Echobode was originally released in 2012 as a Rack Extension for Reason only. The following year a mutation of this device also appeared in Teenage Engineering's OP-1 synthesizer under the name of CWO. Now VST and Audio Unit users can also enjoy this unique mixture of frequency shifting and modulated delay.

Echobode is a delay effect with a frequency shifter placed inside the feedback loop. The frequency shifter algorithm is inspired by the classic Bode Frequency Shifter (named after its inventor Harald Bode). The difference between a frequency shifter and a pitch shifter is that it shifts the audio spectrum linearly. E.g. an overtone series of 100, 200, 300 Hz can be shifted by 50 Hz to 150, 250, 350 Hz, making the overtones inharmonic. This effect in itself is great for creating metallic bell timbres, but putting it inside a delayed feedback loop opens up many other possibilities.