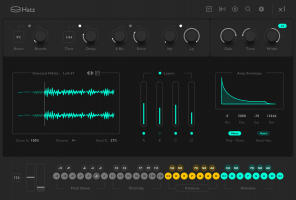 Thenatan has announced the release of Hatz, with an offer that ends on the 31st January, 2022.

What if I Told you Hatz Will make your Life Easier?

Creating hi-hat patterns, snare rolls, and stutters have never been easier. Hatz is here to do it all for you. Save TONS of time instantly. Make rolling Hihats in less than a second and play different patterns to combine with your drums.