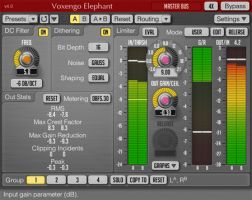 Voxengo has announced the release of version 4.0 of Elephant, a mastering limiter plug-in available in AudioUnit, VST and VST3 plug-in formats (including native 64-bit support), for Mac OS X (v10.5 and later), and Windows computers.

Elephant 4.0, which is backwards-compatible, includes the following changes since version 3:

The introductory price of $99.95 will be effective for two weeks from now, which is 15% off the regular price of $119.95. Upgrading from the previous version costs $49.95 if the previous version was purchased earlier than 180 days from now: otherwise the upgrade is free during this grace period. Demo version of Elephant can be downloaded freely at the Voxengo web site.

Find Elephant in the KVR Marketplace