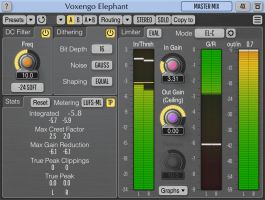 Voxengo has announced the release of version 5.0 of Elephant, the mastering limiter plugin available in AAX, AudioUnit, VST, and VST3 plug-in formats, for macOS and Windows computers.

The "EL-5" algorithm introduced in Elephant version 5 takes the best from "EL-4" and classic "AIGC" algorithms. The "EL-5" is not as loud and "hard" as the "EL-4" algorithm, but it is much more precise than "AIGC" algorithms while producing an alike smooth sound. This algorithm better retains dynamical structure of the program material while at the same time adds a unique "sparkling and fresh mojo" to the resulting sound. This algorithm is responsive to the "Timing" and "Rls/Atk Ratio" parameters that can be adjusted to tune the algorithm further.

Find Elephant in the KVR Marketplace