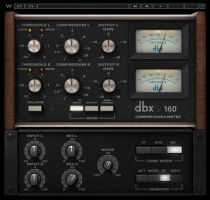 Founded in 1971, dbx has always aimed "to get closer to the realism of a live performance." This goal guided the development of the Waves dbx 160 plugin, allowing users to achieve stunning realism in the studio or to add nuance to an actual live performance.

Considered one of the best drum compressors ever, the fast-acting dbx 160 stands tall among its peers, boasting a very clean sound with minimum THD. The original dbx 160 compressor was used in almost every major recording in the late 1970s and throughout the 80s, and later models in the 160 series also became an industry standard.

Created in collaboration with dbx and authorized by Harman, the Waves dbx 160 utilizes advanced and meticulous modeling technologies that result in what Waves believe is the most authentic-sounding emulation in existence. Waves offers this realism in both Native and SoundGrid versions.

The Waves dbx 160 is intended for use in the studio and live. It also features an MS matrix, mix and noise controls, and a stereo component (the original hardware was mono only).

Jason Kunz, dbx Market Manager of Recording & Broadcast, comments, "We at dbx Professional Products are very excited to be working with Waves on the legacy 160 dbx plugin. The meticulous detail that Waves dedicates to their product development is clearly heard in the finished product."

Pricing has not been announced.