60s Motown Kit by Drumdrops is Soundware (e.g. samples or presets that load into other products). 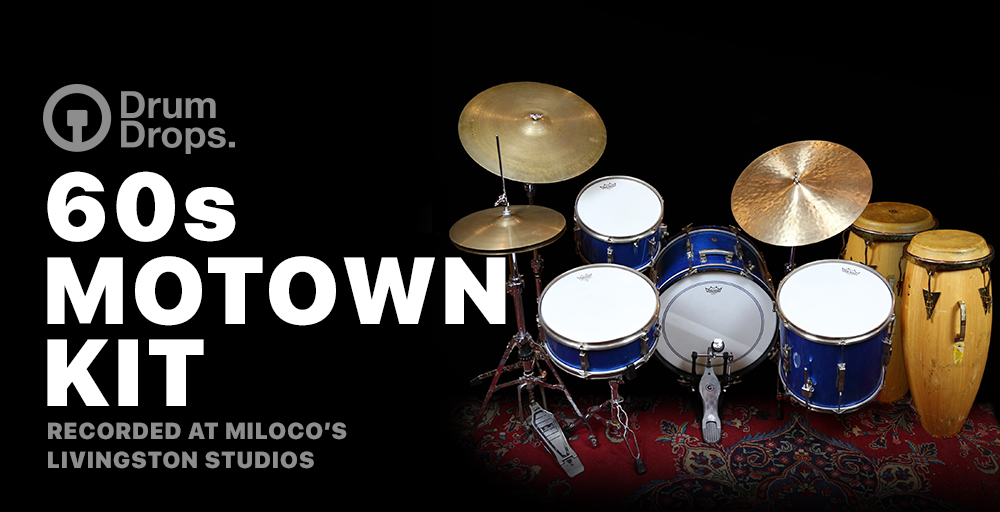 Drumdrops with producer Timmy Rickard have recreated the 60s Motown Drum Sound with the introduction of the 60s Motown Kit available in seven packs. To recreate the 60s Motown drum sound is a difficult task. Kits varied from session to session, mic setup was minimal and the gear was all vintage but Producer / drummer Timmy Rickard (producer of the 60s Gretsch Round Badge Soul Kit) studied the sound and we think we nailed it. Recorded in a large live room at Livingston 1 studio in London, the room was mic'd up as if there was a full Motown band in the room – brass section a vocal mic and then two mics on the kit – a kick, and a kit mic placed above the bass drum, between the rack toms and below the ride. Set these mics up around a 60s kit and voila the 60s Motown drum sound is created.

For the kit we used Timmy's 1960s Ludwig club date kit with a 20" x 14" kick drum one 12" x 8" rack tom and a 14" floor tom. Four snares were used – two Ludwig Pioneer Snares, a Ludwig Hollywood Snare and a Slingerland Shelbyville Snare. We used two cymbals, a Zildjian Trans Stamp and a Zildjian Constantinople Hammered cymbal (both doubled up as rides and crashes) and some Zildjian vintage hi-hats. All the drums were fitted with Remo Ambassador heads.

Mic wise we used Neumann Valve U47's & 67s, Coles ribbon mics, a Sony C38b and an AKG Valve C28. Mic pre's used were UA2-610's, Telefunken V76s and a Neve 1073. All of the mics were recorded without EQ or compression except the overhead microphone which used an EAR vale EQ and compressor.

We also include some percussion samples in the packs - congos, a tambourine and hand claps. Due to the number of mics we used to capture the sound the separate mic packs come with a lot of samples. In the Kontakt and BFD packs there are over 30,000 samples.

The "Multi-Sample Pack" is a sample pack containing mixed stereo samples of each articulation. We have included up to 30 velocities with 3 round robin variations and the pack totals 2766 drum samples. You can either use our built in patches or build your own, using the samples included. All of the samples are mixed from a combination of the kick mic, kit mic and four 'band' room mics and recorded as 24-bit 44.1 kHz WAV files, meaning they can be loaded into almost any sampler or drum machine. We have also included 16-Bit samples for legacy compatibility. To make things easier we have included patches for some of the most commonly used software packages including:


We also include 1543 MIDI Loops to this multi-sample pack, covering a variety of genres including over 124 60s Motown loops. The loops are mapped to the default MIDI map.

The Multi-Sample Pack of the 60s Motown Kit is available from the Drumdrops store for £ 22.00.

The Slate Trigger patch has been created using the kick mic, kit mic and 4 room 'band' mics. There are samples for the kick drum, snares and toms. The samples in this patch have up to 30 velocity levels and five round robins totalling 9360 samples. The samples come in the tci format.

The Drumagog 5 patch uses the same samples and you can choose the balance between the kit mic, kick mic and room mics. This patch uses up to 8 velocity levels with four round robins totalling 1664 samples. We have included samples for the Kick, snare, toms and hi-hat. If your version of Drumagog contains the Auto hi-hat tracking feature then the samples will follow the opening and closing of the hi-hat. The samples come in the gog format. We have also included a patch for Drumagog 4 which uses 234 samples.

The DrumXchanger patch contains stereo mixed samples (a combination of the rom mic, kit mic and kick mic samples). This patch contains eight velocity levels with no round robins totalling 100 samples. The snares also contain a rimshot sample that have their own adjustable trigger threshold. The samples come in the splx format.

The Drum Replacement Pack of the 60s Motown Kit is available from the Drumdrops store for £ 12.50. Head over here to find out more.

The "All Samples Pack" contains the "Multi-Samples Pack", "The Drum Replacement Pack" and all of the samples from the "Kontakt 5 Pack" (but not the instrument found in the Kontakt Pack). These separate kick mic, kit mic and four room mic samples are provided with up to 30 velocities of each articulation and 5 round robins and total 30900 24-bit WAV samples. Customers can build their own patches for their favourite samplers from these.

We have also included an SFZ 2.0 compliant patch which utilises the separate mic samples and has been tested in Plogue Sforzando.

The All Samples pack of the 60s Motown Kit is available from the Drumdrops store for £ 32.00. Head over here to find out more.

The "One Shot Sample Pack" is perfect for customers who want to check out the sound of this kit or only need one velocity of each sample. The pack includes one velocity of each articulation totalling 53 drum samples. These samples come as 24-bit WAVs and 16-bit WAVs for the legacy drum machines. All of the samples are mixed from all of the microphones.

The One Shot Sample Pack of the 60s Motown Kit is available exclusively from the Drumdrops store for £ 7.50. Head over here to find out more.

The "BFD pack" has been been built as an expansion pack for FXPansions BFD3 and BFD2. The pack comes with 51 articulations which have been recorded up to 240 velocity steps and in total it contains 30210 samples. This kit also includes 15 groove palettes. These are split into 245 Motown loops. Included are four mix presets per format.

The "Kontakt 5 pack" contains the second generation Drumdrops Kontakt Instrument which has been rebuilt completely from the ground up. The new instrument comes with a completely new GUI and has many new features. Special focus has gone on the compatibility with E-Kits so e-kit owners can completely customise their kit to work perfectly with the instrument using our new MIDI CC data page. This pack only works with the FULL version of Kontakt 5.6.1 or above. The new instrument includes many new features such as:-


The 60s Motown Kit, Kontakt pack will be released soon direct from the Drumdrops website for £ 45.00.

The "Dual Kit Kontakt Player Pack" will be released soon and contain both the 60s Motown Kit and the 60s Gretsch Round Badge Soul Kit (rebuilt for version 2). Contained will be both of the kontakt instruments we have built for these kits but they will be Kontakt Player compatible and have full NKS compatibility.

If you want to purchase 60s Motown Loops or multi-tracks then check the album 60s Motown Drops here.

Toontrack Music EZbass to be released in May 2020