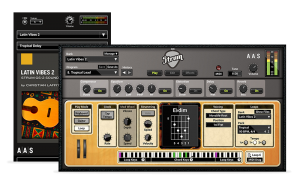 Resident sound designer Christian Laffitte is back at it again with Latin Vibes 2, exactly where the successful Latin Vibes sound pack left off. Drawing from his extensive world music knowledge, Christian explores once more modern tropical Latin music but this time around, adding colors and flavors straight from the African continent. With its 12 styles, 84 guitar presets, and 84 strumming patterns playable with your own chord progressions, Latin Vibes 2 is jam-packed with groovy electric and acoustic strumming loops and sounds that will for sure add good vibrations to your next world music production.

Christian Laffitte is a French musician and sound designer based in the South of France. He has been developing sounds for Dream, Arturia, Zoom, Applied Acoustics Systems, M-Audio, Avid to name a few. He also composed music for Sony video games trailers and for French TV channels and radio stations. As a keyboard player with a great interest in synthesis and new technologies, Christian Laffitte has put all his passion in music and sounds in the creation of Wejaam: a free music sequencer for smartphones and tablets.