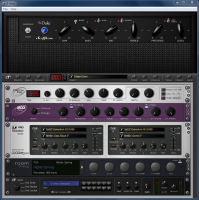 Average user rating of 4.60 from 5 reviews
Read all reviews Add A Review
Report

I've been using S Gear for just on 5 years now. I also have software amps from Apple(main stage), Plugin Alliance, Overloud, IK, Kazrog, Positive Grid, Studio Devil and a number more. NOTE. I do not play metal style guitar. I do almost everything else: jazz, blues, rock, punk, indie, funk, 60's, new wave, latin but I not shredding and so my opinion is useless if that's your bag.

I use S Gear in my studio and as yet have not used it live but i am very keen to try it for performance. I just can't quite get comfortable with the idea of a laptop being my amp. if it crashes, I'm dead in the water.

That being said, here are my high level considerations for anyone looking at S gear vs other software modelers.

1. Sound - S Gear is consistently the best and most natural sounding plugin I have. hands down. I have a bunch of others from a wide range of companies but none of them have the reactive and nuanced feel of S Gear. It not an amp but it's damn close and damn close across a wide range of amp types. It responds to my guitar volume and tone in a very musical way. It's easy to forget you are using software, which is the highest praise I can give any amp plugin.

2. Ease of use. it's so easy to get a good sound from S Gear which is crucial for me. When I am writing I don't want to dick around for ever to get something that sounds vibey enough to help inspire the song or idea I'm working on. If I have start knobbing around I'll lose the spark. The presets sound superb and cover so much ground it's ludicrous.

3. Tweakability - If I am in the mood to dig in and start creating my own preset for something, I can get there pretty quick. The UI is not perfect but given the small team creating this product I'm fine giving S gear some grace in this regard. The skeuomorphic approach works well on most things and all the controls do something audibly to the sound when you adjust them which makes learning the UI and dialing in a sound quick. The IR's and effects area is a little cloudy and not as intuitive. And preset management pretty much sucks.

4. Developer responsiveness - Outstanding for me, every time over the last 5 years I have a question or issue, Mike has been back at me super quick and not just robotic answers. He really engages with the questions and has been open and honest.

5. MIDI implementation and interoperability - I use a range of DAW's (Live, Reason, Pro Tools, Reaper, Tracktion plus some others) and S gear is rock solid in all of them. I also use some MIDI controllers to switch patches and parameters, (Akai, Sonoma, Arturia, Novation etc) again S Gear is fast and clean with them and easy to configure.

Clearly I'm a fan but I think this is because S Gear has consistently delivered the good sonically above all else.

Heres what I want from S gear or what I think it lacks.

1. Faster pace of upgrades - While what is does now is awesome in my book, it is long time between upgrades and often they are fairly superficial. I would like to see some new amps or re-voicing of existing amps. the effects and IR area also could use some love. There are also a number of other options that would make the product more flexible but whether due to bandwidth, technical debt or both, significant updates don't drop that often.

2. A live performance mode - not much to say here. the standalone app is close but needs more work to be a solid live option.

It's late and running out of steam. :) I'll add or refine existing points as I think of them.

This S-gear has been upgraded now, from 3 amps to 5. And an added tuner, and as well a Room Thing and Mod Thing. It still caters to the traditional kind of player that is brought up with 70s-80s hard rock, and not so much modern day high gain metal. It has a response and feel that - for the price - is really what the others are missing out on. It has this "break-up" in between cleanish and half-crunch, that is smooth and seamless especially when volume knob on the guitar is used. Having used it now since it's inception, I tend to fall back on using two amps only, the later Tweed (just 3-4 knobs) or the Duke. Together with cab sims. And assorted IR's. It hasn't as of yet nailed that AC-30 top boost but version 3.0 is in the works. The thing that sparked my interest was the Stealer which is a take on the obscure Park amps that was made by Marshall too. It had something that I liked in the response and when you cranked the treble up the distortion didn't become too unbearable.

Interface:
It could be bettered in some contast, especially when scrolling up and down the preset window. But generally speaking, simple layout, easy to get grip of. In the few times I've opened up Guitar Rig 4 again, after I bought S-Gear, I get so annoyingly pissed off by its unwieldy GUI in the Guitar Rig preset. I thought how on earth I could even ever cope with that unwieldy thing. S-Gear is way much more readable. But as it is, I want to have resizable graphics. I know I know. Very few have this feature anyway. But I think that it's important.

Features:
MIDI and hooking up events to tracks in other DAWS are no problems, at all, changing presets fast, and the most useful feature that they have included is in that in each preset, you have an A and B amp. I e you can keep the effects, the cab, and all the other things so you really don't need to completely change to another patch which makes it loads effects and reverb all over again. Which means that you can have overspill delays, between distorted and undistorted sounds. Very useful feature, but maybe not that unique.

But still today, since it's inception in 2011 (I think) it's still heads and shoulders above the rest of them, regarding these few amps, it has nailed. All the other may have more bell and whistles and thrown in the kitchen sink too, but bang for the buck in the amp side of thing, they're still ahead of the game.

Yeah, can't say anything bad about this. Came included in the Slate bundle, sat on the back burner because I have other guitar vsts, as well as real amps and mics which I prefer. I finally checked it out, the other amp sims are now history and my neighbors are happy that the walls aren't shaking. This thing sounds REAL. It lacks a bunch of bells n whistles, but who cares. Takes real pedals well and the built in RoomThing reverb is brilliant. Deserves more than a 10.

In a never-ending sea of new emulation plugins coming out from every direction, it can get daunting trying to find the ones that genuinely stand out from the crowd. Loads of plugin companies today boast that "this ones different" and "there's nothing like this". Only after multiple purchases and lots of cash spent later, do you realize you've been a victim of the now very strong music tech. marketing world. I have spent years trying all of the "big boys" in the guitar sim world. You name it, ive used it and there is a good chance I probably own it. Now don't get me wrong, guitar amp sim's have gotten to the point were they are serious contenders with the real thing and many developers like IK, Line 6, NI, and Waves have cranked out some beasts in the past few years. Despite the great sound I could get from these, I'd all but given up on finding a sim that just "felt" right until the random night a month or two ago I randomly decided to demo S-Gear by Scuffman Amps. After hearing some rave reviews by some friends of mine I downloaded the demo on a whim. This ones the real deal guys. Its truly one of those Gems we all talk about in the plugin world that simply change the way our music sounds. I just flat out love playing through it and the sound is beyond superb. Its not loaded with tons of features and extra processors like some of the others but what it does, it does second to none. I know everyone has their "desert island" plugins, and after a few months of using this guy, I have it up there in the top on my list! Highly recommended.

S-Gear is very easy to use and is visually rather pleasing. It is clear an the three main components are logically laid out. The chosen amp is at the top followed by the Delay and then the Speaker Convolution unit. Finally at the bottom are the basic selection controls. It really is simple to work with.

This is the killer feature. It sounds amazing. Each of the three different amps have their own character. The Duke is kind of Fendery whilst the Stealer has a Brit Rock thing going on and the Jackal adds a bit of Californian dirt into the proceedings. Now the most difficult thing for any amp sim is that area of break-up. S-Gear has this nailed and has feel by the bucket load. It responds to the volume control on your guitar very like the real thing. I can get the Larry Carlton thing going very easily. Something that is not usually so forthcoming. Added to this when you start experimenting with the type of Speaker ir's - well that is if you are lucky enough to have a set of Redwirez speaker impulse responses - you can experience a really wide range of tonal variation. I really had a big smile on my face playing with this baby. The Jackal has a wonderfully expressive drive sound and feels like playing molten liquid.

The S-gear has the basic minimum to make it work. If you need a compressor you will have to add your own - likewise an overdrive pedal. However as I like to use my own favourites within a DAW this does not bother me at all.

The on-line manual is excellent.

These are interesting but I never really use other peoples presets as I like to create my own sounds. However saving you own is easy. Hovever read the manual carefully otherwise it might be a bit confusing.

Mike Scuffham will reply almost immediately and is friendly and very helpful.

I think it is one of the best sounding amp sims around. Some of the others may have loads of bits and bobs, but do they sound this good? Perhaps not. Plus it is actually rather cheap.

Yes...but there is one thing that is not nice: it's 32-bit only and has to be bridged.

Wow - so far off...
You must have mis-installed it.
The installer installs both the 32 and 64-bit versions of the plugin - both of which work great.