Synth1 Librarian by Neutrino Sky is a Virtual Instrument Audio Plugin. It functions as a VST Plugin. 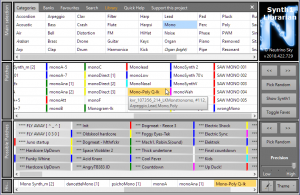 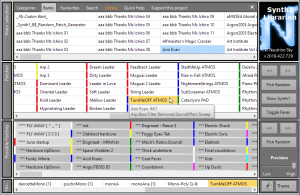 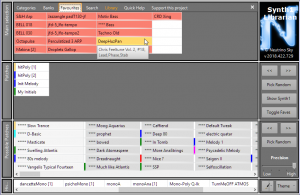 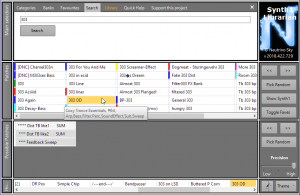 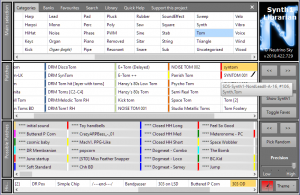 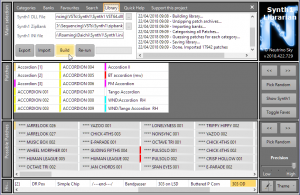 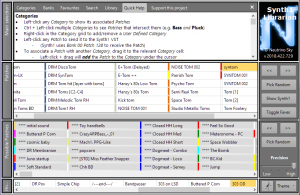 Synth1 Librarian is a free VST plugin designed to accompany Ichiro Toda's Synth1 Analog Synth VST instrument. It allows you to quickly find patches within your patch library – useful when you have over 17,000 patches.

Here's a video explaining what it is, and how it works (old alpha version):

I've been using Synth1 Librarian for about a year, and it sure makes finding a patch for Synth1 a lot easier. When I first installed it, it worked perfectly. However, now it will not load at all and I can't figure out why.

I have a Win 10 pro machine, 8 core, 16 G RAM. I use Reaper as my DAW but also Cantabile 3 as a VST host. I had not changed anything on the computer, but Windows updates are notorious for messing up existing software. And I think that's what happened here. Also tried another computer... more on that later.

Here's what happens... when I run Reaper, it will find Synth1's dll fine and will run the plugin... but it will not show the librarian at all! It does, however, show Neutrino Sky in the developers list. There are no errors given or any reason.

1. re-installed synth1 (downloaded it again from author's website... same version that I already had).

2. re-installed the librarian (I downloaded the newest version .exe).

3. put Synth1 in the SteinbergVstplugins folder, and ran the Librarian setup from there.

Same as before (and I've tried both the 32 and 64-bit versions of Reaper... makes no difference) on my Window 10 Pro desktop machine.

However... I also have it on a laptop running a Win 10 update from Win 7. I seldom use this machine anymore because it's getting old and slow. But I still have Reaper on it and a lot of my free plugins, including Synth1 and Librarian. When I tried to use the Librarian on Reaper on this machine, it took about 3 - 4 minutes to load the Librarian, but it did finally load and I was able to select presets from it.

Sorry for that longwinded intro... but I'm wondering if anyone familiar with Win 10 Pro might have an idea what I could look for? I really don't think it's a problem with the librarian app... but another example of MicroSoft's updates messing up our computers (which they seem perfectly ok with!).

Thanks for any help.

This is a cool librarian software, in my experience on win10 64-bit with Reaper, it works well.

Synth1 was always the best freeware alternative for synth plugins, .

but I stopped using it years ago, just because i missed a great preset browser inside it.

Now with this librarian, Synth1 is in my plugin folder again.

In the past I also did some Synth1 trick (e.g created an Excel macro, to generate random patches for ten banks).

With this librarian, I'm able to find the right presets among thousands of presets.

For example I liked the distorted guitar sounds of ReFX Slayer (yeah, I could use it from FLStudio), .

and now I can click on "guitar" in this librarian, and easily find some brutal distorted guitar sounds among the Synth1 presets.

The other freeware synth I use is Dexed. also have a "limited" patch manager - I only wish there were some simlar librarian to that.

This is a super cool addition to the already legendary Synth1, and if you also like it, please consider a donation of your choice.

Very very nice! Thank you! works like a charm. Nice design. Can't wait until you go do this magic on other oldies and new ones.

Add a " new bank builder" with dragging and dropping the presets and like I said capable of more plugins would make this a totally payable plugin.

Nice tool to use as complement to Synth1. Thank you.

Awesome!! Thank you so much, Now I can actually use this nice synth, overwhelming before to find a certain style of patches. Good job!!.

"Here's a video explaining what it is, and how it works (old alpha version)"

The installation of the net framework stops at about 5 procent and doesnt move. Tried both x86 and x64.

This tool is amazing and much appreciated. A long time ago I downloaded more presets for this legendary synth than I could listen to in a lifetime. This makes exploring them fun and productive.

I am having this error. Any ideas on how to fix it??

First we need to establish if Synth1 Librarian is the problem, or if there's a bigger issue. Try this:


If the value isn't C:\, you've got some kind of Windows issue. Does your Windows user name contain accented characters? If so, that could cause problems.

Also, check the file properties for Synth1.ini, and ensure that read-only isn't checked.

Yeah got it fixed. Problem with permissions.

With the advent of the Librarian, I use synth1 more often... especially with drone-e and hypercyclic.

Zebra could use this as well.. Would be nice.

If anyone experienced problems getting Synth1 Librarian to work with their DAW/host (e.g. Cantabile), I've just released a version that hopefully fixes the issue.

Could you please take a look at high PPI friendliness?
It seems like it reports wrong windows size to a host.
I'm using 4K monitor, with ppi scaling set to 175%. When the plugin I run the plugin in Reaper in a native mode (without bridging), everything looks properly (fonts are scaled and sharp) but rendered window is horizontally too small. see screenshot

I've also tried to run the plugin in bridged mode. This time the entire window is displayed, but fonts suffer from the issue of non-high-ppi-ready-application, which renders by blurred fonts (those are rendered to bitmaps and upscaled by operating system. See screenshot

This issue might be however related to Reaper bridging implementation.

Link to both screenshots on one page.

Thanks for letting me know. I'll see what I can do (without having to re-write the UI;)).

If you have accents or umlauts in your WIndows user name, I've posted a workaround to get Synth1 Librarian working with Synth1:

How to load the librarian in synth1?

The librarian doesn't work like that. You install it as a plugin, and then configure it to point to your existing Synth1 VST. You should find all the instructions to install and configure it on my website.

Just released a couple of fixes so that your DAW/host doesn't have to be run as Administrator.

Hey great job Mr Neutrino! I love Synth1, but patch management is awful and I've tended to drop it out of use - I've needed this app for a long time but didn't realise it existed. Have installed on my Win/10 64-bit machine and using Cantabile, running several instances in parallel without dramas. It is ridiculously easy now to find patches quickly, and "favourite" them for later; with multiple instances it's so cool now to find the right blend of sounds when I've got two or more keyboards running and in the middle of some creative activity, something that would normally frustrate me trying to scroll through the thousands of patches in all those ZIP files. Have made a small donation - please have a pint on me :).

Average user rating of 4.33 from 3 reviews