PluginsForumMarketplaceDealsVideos
00 items | $0.00 CHECKOUT Search
Who are we in the KVR community in 2020?VOTE NOW
Industry FocusFrankfurt Musikmesse Highlights 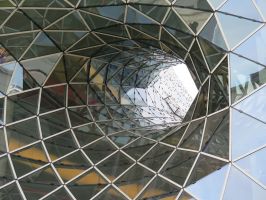 The Frankfurt Musikmesse took place last month. Like NAMM the crowds were larger than the recent past. In fact, according to Messe officials there were more than 108,000 attendees from 146 counties (kinda cool), and about 2,300 exhibitors.

Here are some highlights...

There is new energy from one of the most important companies in the history of electronic musical instruments. After a long absence Roland is moving quickly into the new modular world and they have thought through a strategy to integrate software and analog. It takes the form of a series of Eurorack products. The Bitrazer, Demora, Sccoper, and Torcido modules ($299 each) can be used in racks or as standalone. They combine high-resolution sound and can be used as table-top units, and are fully re-programmable via computer, smartphone or tablet. 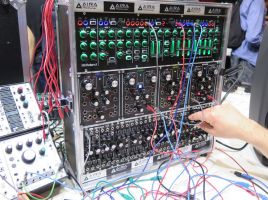 The new SYSTEM-1m ($599) is a semi-modular synthesizer with PLUG-OUT capability and a unique design that allows it to be used as a Eurorack module, table-top synth, or 19" rack-mount unit. The SYSTEM-1m will also load classic Roland synth models like the SH-101 and PROMARS.

And speaking of modular...

As expected there was a significant number of analog synth modules creating crowds in the aisles of the Hall 5.1 area. From one person's perspective the Eurorack trend reflects the desire to create one's own instrument by constructing their own combination of oscillators, filters, etc. And their unique sounds might vary depending on environment and mood. It's a long way from the day when Opcode's DX7 Editor/Librarian ran out of memory when the user's library of presets exceeded 5,000!

Speaking of modularity in the software world, in the u-he booth they were doing demos of their Bazille ($129) soft-synth, which combines 4 oscillators with modeled analog filters. Its modular engine allows for patching of any signal output into any signal input, regardless of signal type.

Korg was showing the MS-20 Kit ($1399). Its MS-20 module in the original form factor. it allows users to assemble a module version of the iconic MS-20 analog synthesizer with greatly expanded synthesis capabilities. There's a limited run of 1,000 units so if you want one you will need to move quickly. 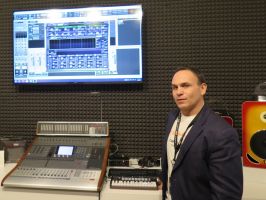 In the Gibson booth Cakewalk was demonstrating the latest version of Sonar as well as their new update to the Rapture softsynth. Rapture Pro ($149) is designed to combine algorithmic and sample-based synthesis. The new version features a useful browser, and the ability for users to load their own samples into it. 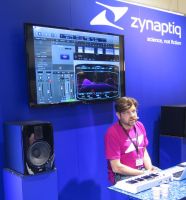 Dan Alvarez in the
Zynaptiq booth

Spitfire Audio was showing their new PP015 Artisan Cello (£99) and PP016 Artisan Violin (£99) libraries on the Kontakt platform. In addition to being recorded with Spitfire's quality and attention to detail (and dry recording rooms) they feature respected London instrumentalists.

Fishman was showing demos of their new footswitch for the TriplePlay system. It allows a user to switch between TriplePlay presets (duh!), has an extra switch, and expression pedal input. No shipping date or price has been announced. They were also showing their ToneDEQ ($299) Preamp EQ for acoustic guitars.

Zynaptiq was showing UNMIX::DRUMS (Price TBA), which as far as we can tell, is the world's first plugin that allows real-time suppressing or boosting drums in mixed music. It is using a proprietary source signal separation technology that provides drum level control ranging from up to +18dB of boost to virtually complete removal. They believe this opens up exciting new options for mastering, music production, sample-based music creation, mash-up artists, remixers and DJs. They were also showing Morph 2 ($179 – Upgrade $89). In addition to new algorithms MORPH 2 has a new formant shifter, graphic user interface, and support for AAX, AU, RTAS and VST formats on Mac OS X and Windows. 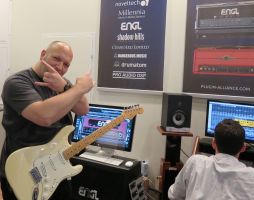 Plugin-Alliance was showing several new plug-ins. They've expanded their assortment of guitar plug-ins and added the Millennia NSEQ-2. I'm looking forward to checking that out the because the Milennia TD-1 is a terrific piece of analog gear.

Native Instruments hosted a party during which they introduced some new products, but also announced the Native Kontrol Standard (NKS): A new technology designed to allow deep integration of third-party plug-ins, making them more operable with their Komplete Kontrol S keyboard series. More on this soon... 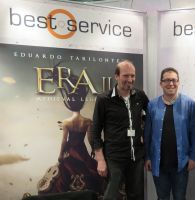 Eduardo Tarilonte was signing posters in the Best Service Booth. In case you have missed Eduardo he is the creative spirit behind a growing number of fanciful libraries under the Best Service umbrella. I was pleased to find that he is neither an elf nor a hobbit, but in fact a real person with a talent for creating interesting thematic sound libraries. Among other products they were showing the second edition of Era Medieval Legends ($99).

Audient announced their new ID-14 ($299) USB, bus-powered I/O device. It has built in preamps the pre-amps from their well regarded consoles.

Softube has entered the VI market. They were showing their new Heartbeat (Price: TBA) drum plug-in. The core of Heartbeat consists of the eight instrument channels. The sound mostly originates from Softube's own modeled analog synthesis, which has been augmented with carefully selected waveforms, and can be processed by selected Softube effects like the Valley People Dyna-mite and TSAR-1 Reverb. 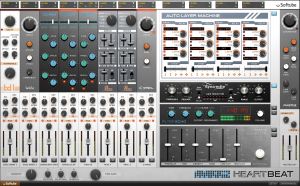 Heartbeat will be released in the Spring. They were also showing their new Marshall (endorsed!) guitar model plug-in in the Universal Audio booth. It's a model of the legendary 1959 Marshall "Plexi" Super Lead ($199) developed exclusively for the UA Apollo line.

One of the best things about musical instruments trade shows is the unexpected. Not every little start up with an idea can afford to go all the way to Los Angeles for the NAMM Show. This year's unexpected product is the du-touch from Dualo.org.

The du-touch is both a controller, a synthesizer and a looper/sequencer that looks like a futuristic accordion. Scales and chords are represented by geometrical patterns, in an effort to make it easy to play and learn. It is the brainchild of Jules Hotrique, a French musician, mathematician, and co-founder of Dualo, who in 2007 invented this layout of keys, called the "Dualo principle."

It was important that several leading MI companies (including Fender!) were no-shows. Although they've now scheduled the event later in April (which means nicer weather!) the Messe still follows soon after NAMM, and since more and more international distributors are traveling to LA in January, some manufacturers feel they can accomplish what they need by just attending NAMM. Personally I think Frankfurt is a lot more fun to visit than Anaheim (unless you're a mouse or Tinkerbell), so I hope the event continues to grow.

And where else would you be able to see a product like du-touch...

So until next year... 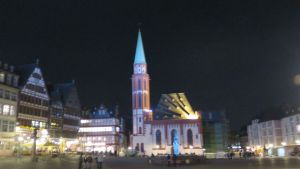 30 May 2020KVR interview with Christoph Kemper: An exceptional product designer