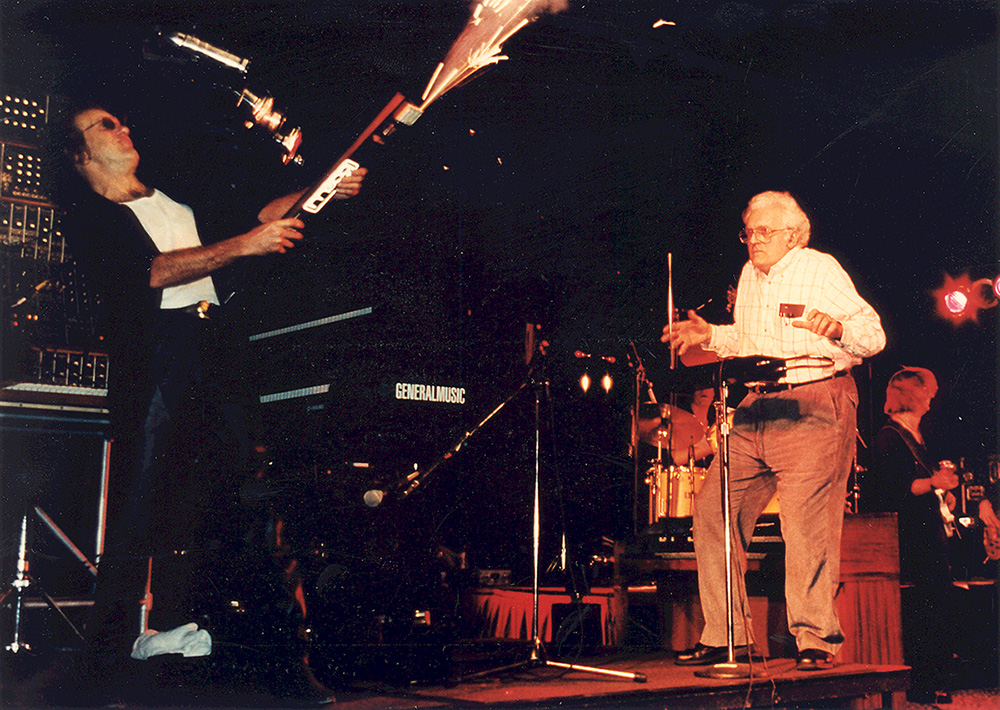 Connecting the past with the future: An interview with Michelle Moog-Koussa

It is unlikely that there are any synthesizer players of either hardware or software products who are not familiar with the name Bob Moog, inventor of the first commercially available voltage controlled analog synthesizer. His earliest products inspired the massive creativity of musicians like Keith Emerson and Herbie Hancock, and innovative orchestrations of music like Wendy Carlos' Switched on Bach.

Robert A. Moog, who passed away in 2005 at the age of 71, was a man of many interests and passions. Many of those interests are on display at the Moogseum in Asheville, North Carolina, and one of those passions is embodied in the Dr. Bob's SoundSchool.

Both of these projects of the Bob Moog Foundation were initiated by Bob's daughter Michelle Moog-Koussa, who was kind enough to speak with us.

Where did your father grow up and get his education?

How old were you when you first realized, "Oh, my dad is Bob Moog"?

Well, he didn't make a big deal of it for the most part. We generally weren't allowed to watch TV, but in 1972, when I was five years old, my dad was on To Tell the Truth

My mom called us around the TV, and I thought why are we watching a game show? And then, all of the sudden, there's Dad. And I just remember having this kind of surreal feeling, this is my serious, geeky, quirky dad, and here he was on TV.

In 2019 you opened the Moogseum in Asheville North Carolina to celebrate your dad's work and synthesizer technology in general. Why did you decide that it would be in Asheville?

Bob spent the last 25 years of his life here in Asheville, and it was his spiritual home. It's a very accessible place. A larger metropolitan city would be a bit of a reach for a small museum. Asheville has kind of evolved at the same time that Bob's legacy here in Asheville evolved. There's a great synergy with the type of city it has become and the Moog legacy.

Though he grew up in New York City, he would go to scout camp, and he was very accomplished at the skills that you needed for camping. He was an Eagle Scout; he loved camping and I think he found a great deal of solace in nature that he could find in Asheville, and I think he also felt like it was a great way to exist just being in sync with nature, and he wanted to pass that on to his kids.

The Moogseum recently opened an additional space for a modular synthesis exhibition. How did that idea come about?

I've always wanted to create an exhibit that teaches people about the parameters of modular synthesis, one that was accessible to all knowledge levels. I've witnessed how daunted many people are by the complex look of a modular interface and I wanted to remove that barrier and provide people with the experience of sculpting sound. The result was an exhibit called "Patching Sound", which recently opened in a newly expanded area of the Moogseum.

When was Bob's first synthesizer prototype built, and where did the inspiration come from? 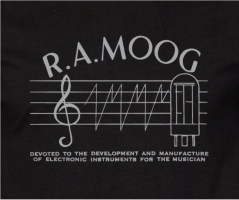 Bob had started a company, RA Moog Co., that, at that point, only produced Theremins and he was representing his Theremin line at the New York State Educators Conference in 1963, and a young professor from Hofstra—a certain Herb Deutsch—walked up to him and said, "You know, I'm a music professor. I use your Theremins to teach ear training in my music classes, and I'm also an experimental jazz composer and there are sounds that I can hear in my head that I cannot make splicing tape. Do you think you could help me build something that would help make these sounds?" And dad immediately agreed.

The next summer Herb came up to Trumansburg, New York, they worked together with Herb basically saying, "This is what I need," and Bob building it. Then Herb would test it and say, "No, I need more of this and less of this." When Bob finally had the breadboard circuits of the first prototype together, he sent Herb to the hardware store across the street to purchase a doorbell. That doorbell was actually the first trigger for the prototype of the Moog synthesizer, and the following year he started manufacturing them.

How did people find out about it at first?

In late 1964, the Audio Engineering Society (AES) convention called to offer a booth space speaking opportunity to Dad because they heard he was doing something innovative. Gustav Ciamaga who was the head of the electronic music department at the University of Toronto, had visited with Herb and Bob had subsequently told AES, "Hey, you should feature this new technology at your show." My understanding is that Dad Bob showed up with a few modules, some kind of bohemian tablecloth, and a bridge table, and he apparently was pleasantly shocked that people like Alwin Nikolais and Eric Siday just started placing orders. Siday was a commercial composer who came up with the Maxwell House signature theme, among many other things.

Did you ever get a chance to meet Leon Theremin?

I didn't meet Leon Theremin. And as a matter of fact, my father didn't get to meet Leon Theremin until 1989, at the Borges Electronic Music Festival, in Bourges, France. Theremin had mysteriously disappeared from his home in New York in 1938 and had been confined at Butyrka prison in Russia for quite a long time. Many say that the Russian government wanted to channel his intelligence and ingenuity towards their own political efforts. He was finally allowed to come to the Borges Festival in 1989.

Musicologist Olivia Mattis was going to interview Theremin for Keyboard Magazine, and when my dad learned about that, he asked Olivia if he could please sit in on the interview. They wound up doing somewhat of a co-interview, and I think it's safe to say that meeting Leon Theremin was probably one of the highlights of my father's life.

A lot of engineers are always looking for the latest, greatest. Was he that type of person, or did he tend to settle on a certain thing and stay with it?

He had a little bit of latest greatest, and usually it was with a new computer, but for the most part, he was low tech in the rest of his life. He didn't have a digital watch for a very long time. He never had a cell phone. And he did pass away in 2005 so cellphones weren't as widespread as they are now, but seriously, I had a cell phone and he did not (laughs).

What did he think when his circuits started to appear as software plugins?

He collaborated with Arturia when he was still alive in their Minimoog and Modular apps and he was very impressed with them.

I think at this point he would be blown away by the quality that exists in software synthesis.

In 2010 you started the Dr .Bob's SoundSchool initiative. What elements of your father's legacy live within it?

He was insatiably curious and constantly self-educating. He also had a real passion for sharing what he knew. He would get a kick out of teaching people, whether it was about synthesizers or Theremins or electronic music or electronic music history, to the extent that he lectured on those subjects. I think sharing the knowledge that he had was one of the ways that he got the most joy, so that's certainly part of it.

When I was in ninth grade, I took physical science, and we were learning about pulley systems. I didn't completely understand some of the physics behind it, and, since Dad had a degree in Engineering Physics, I asked him if he would help me with my homework. He was very focused on his work, but anytime I would ask him to help me understand something, he saw an opportunity to enlighten. So, he immediately set up a pulley-like system and got down on his knees and showed me all the component parts and exactly how the physics was working. He was a natural teacher.

The Dr. Bob's SoundSchool is teaching the principles of sound to second graders, as part of the science curriculum. Is there anything special about the way you're going about it?

Yeah, I think there is. Dr. Bob's SoundSchool is a 10-week experiential science curriculum that teaches the fundamentals of sound to seven-year-olds, which, I've always felt, is important for kids starting to discover the sciences. So that's part of what we're doing, but the other part is trying to get them to think creatively and to embrace the concept of ideas and the process of discovery. And this is where Bob's legacy really shines through. He devoted his whole life to coming up with different ideas and testing them to see if they worked, which is, in a nutshell, the scientific method.

The students each have a little Dr. Bob's notebook where they write down their ideas. They test their ideas out, and then they write down the results. We actually use pages from Bob's schematic notebooks to show them examples of why it is so important to write down your ideas. We want to make discovery fun. But in the end, we really just want them to be able to think creatively, to think outside the box, to not be afraid to ask questions. The value of ideas, that's all a big part of Dr. Bob's SoundSchool, and it was a big part of Bob Moog.

What is the future of the Dr. Bob Sound School and how can people learn more about it?

Dr. Bob's SoundSchool currently inspires almost 3,000 children in 100 classrooms every year. Our goal is to expand the program nationwide in the next two to five years. We are working currently working on a custom educational tool that will help us be able to scale the program to reach tens of thousands of students. Once that is completed, we can bring Dr. Bob's SoundSchool to school districts across the United States.