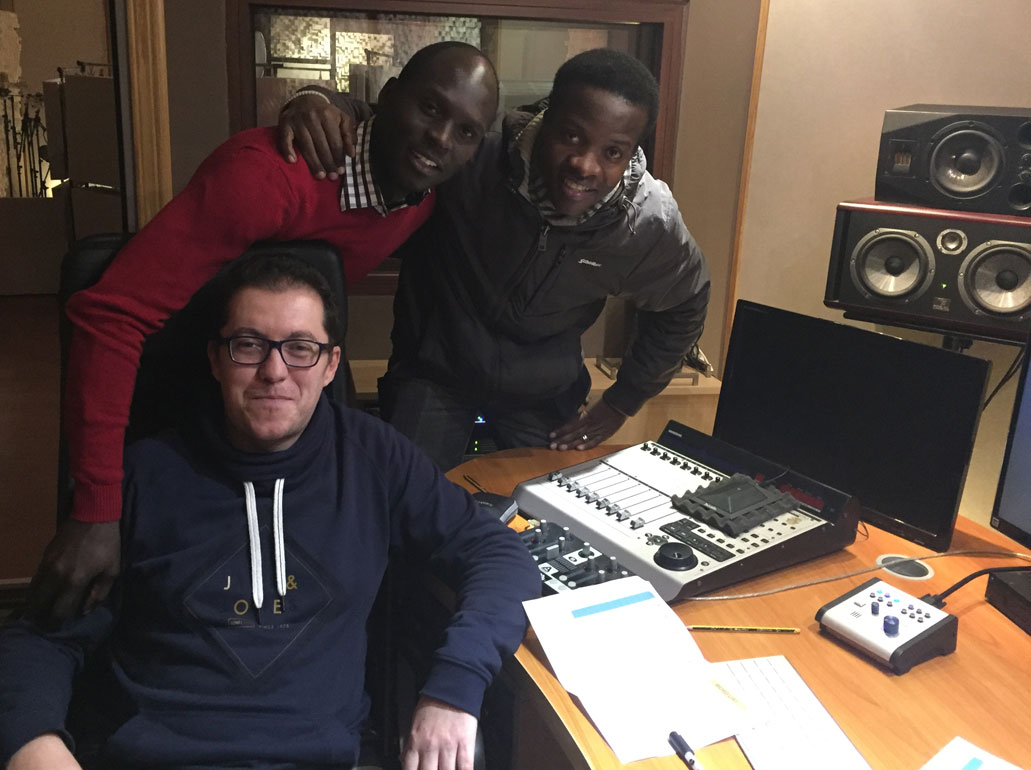 Sampling the inner and outer worlds: An interview with Eduardo Tarilonte Sound designer and producer Eduardo Tarilonte has released a steady stream of sample libraries in the last 10 years, starting with Celtic Wind in 2006. His products never fail to be creative, well-recorded, and perhaps most importantly, they aren't like anything else you can find on the market.

His latest, KWAYA (available from Best Service), is a detailed library of individual voices and choirs from Africa. It was a massive and logistically complex undertaking that he was kind enough to tell us about...

What is your background with music?

I started my career as a musician, although my dream was always to be a soundtrack composer. When really young I started playing accordion but I got hooked on synthesizers the first time I heard one. I remember my childhood playing lots of soundtracks, TV themes and Jean Michel Jarre music on a Technics organ. And I still remember the day I could afford my first Korg synth. Back then I was composing every single day. When I turned 18, I decided to dedicate my life to music and my dream of being a composer.

I spent about 14 years struggling to make a living from music, I played in many bands, mainly folk and Celtic/rock while I composed music for some TV companies. There were lots of troubles, but I never gave up.

Do you have a specific interest in folklore, Elfs, etc?

Yes, a lot. I have always been fascinated by fantasy books and have been playing Dungeons & Dragons role playing game since I was a child. In fact I still play it and is my main hobby. That's the reason why I always need to put some magic in my libraries. I need to feel they tell something special. Sample libraries to me are like books or movies, every one of them tells a story, they are not just a bunch of samples put together.

Are you a singer yourself?

No, I am not, but I wish I were. Voice is such a perfect instrument.

How do you start a new project? Any particular gear you are especially fond of? Eduardo with his prized Neumann

It takes quite some time and lots of work. Finding the right musician is very important, so if I don't find the one I like, I wait until I find a good one. Most of the times I have to fit the player schedule, so sometimes it happens that I am editing a library but recording some of the instruments from the next one, because the player schedule is tight and I have to adapt my calendar. Also booking flights, hotels, restaurants and of course a good recording studio. It is a lot of work, but nothing compared with the post production.

For the recording gear, it depends on the library. I am a fan of Neumann microphones, so almost always there is some of them involved in my recordings. I am very picky with the sound, so testing different positions and mics is something I pay special attention.

What's your personal favorite of the libraries you have done to date? Are there other producers of sound libraries that you admire?

This is a tough question! Hard to say, but Era and Forest Kingdom could be among my favorites. Also Cantus and KWAYA.

How do you find the people to play the more unusual instruments in your recording sessions? That's definitely important and not easy at all! Sometimes I am calling contacts for months to find the right player.

Since the instruments are usually not common, it's very hard to find a good musician, and most of the times they live abroad which increases the production costs and makes it harder to meet a schedule.

Tell us about the African choir you used for KWAYA and how you found them. What are some of the challenges you faced? The way I found them was amazing. I have been dreaming of recording a library like Kwaya since the beginning of my career but I was not lucky with the groups I found before, so I was patiently waiting and looking for more options for a long time.

One day during a short holiday trip in a distant and small village in Spain I saw a poster of an upcoming concert from an African vocal group. I noted it down and a month later I decided to call them. I contacted their manager and explained what I wanted to record. It's usually hard to explain to someone new to this business (laughs). After a while talking, she asked me where I lived. I told her my city name and do you know what? They were having a concert there the very next day! So I could meet them in person and see them singing. I instantly fell in love with their voices and knew I found the perfect group for what I was expecting. Magic happens...

Anyhow the recordings were not easy. I had to repeat them quite a few times until I got the sound I wanted. I am very picky and if I am not 100% satisfied I prefer not to release the library. It was an expensive production but fortunately, after all that, I got exactly what I wanted. I couldn't be happier with the sound, and that's the only thing which matters, the final result.

Do you have time to create much of your own music outside of recording these instruments? If so, what styles of music do you most enjoy working on?

My favorite styles are new age, ethnic and of course, orchestral film music. I used to compose a lot in the past, but nowadays I am focused on making sample libraries, which is very time consuming. Anyway, I always try to find some time to keep composing. My main excuse is always making demos for my sample libraries, which is something I love since is the best way for me to know the real quality of the library.

What are some features of the Kontakt platform that are particularly helpful in your productions? The Kwaya GUI in Kontakt

Kontakt is a great platform and of course the most popular one. The main feature all developers like from Kontakt is the scripting. You can do almost everything! I still remember that my first sample library, Celtic Wind, was released for Kontakt 2, the first Kontakt version with scripting capabilities, and was one of the first libraries using the scripting features.

What's next for you? How do you make the decision of what not to do?

The sonic wizard at work

I just do/sample what I love. I couldn't imagine doing something I don't like. My decisions always have to do with something I would love to see released as a composer and something that tells some kind of story, as I said before.

My next release is a collection of solo vocal libraries that will be released somewhere around September/October. I am also working on a project I started last year and still will take me one more year to complete. I never work with deadlines in sampling, the libraries are released just when they are ready. It will be something big, but I am sorry I still cannot say anything.

For now we'll have to be happy with Eduardo's existing body of work, which is comprehensive especially if you live somewhere between the inner and outer worlds.

Check out Kwaya. You would be hard pressed not to find something fun to do with it!