The nominations for the 2021 KVR Readers' Choice Awards are in, as voted for by the KVR community. Voting is now open so make yourself heard here.

We present to you the top 5 nominations for 'Favorite Dynamics Virtual Effect Processor'.

During this phase KVR members can choose their preference from the shortlist in each category (or stick with their previous selection, or choose another if they prefer, who are we to judge?) Spread the word, tell your friends, tell your enemies, tell your mum, #kvrrcas. All categories are optional. Please note that Freeware and Donationware products should not be voted for in any categories except Favorite Free Virtual Instrument and Favorite Free Virtual Effect Processor. Everyone can change their nominations / votes at any time until the voting closes.

NOTE: If the product you wish to vote for isn't in the KVR Product Database yet please contact the developer and ask them to add it.
Who won last time? Find out at kvraudio.com/2020-kvr-rca-winners

Presswerk is a powerful and easy-to-use dynamics processor from u-he. With rich feature set and an "everything at your fingertips" interface, Presswerk is well suited for a large range of sound shaping tasks. Presswerk blends the tone and warmth of classic hardware models with modern touches to create a compressor rich in musical soul, but still packs a punch.

With a sonic signature best described as "stealthy", Kotelnikov has the ability to manipulate the dynamic range by dramatic amounts, while carefully preserving the original tone, timbre and punch of a musical signal. As such, it is perfectly suited to stereo bus compression as well as other critical applications.

The "Gentleman's Edition" (GE) adds several improvements to the standard edition's feature set. The most obvious being an intuitive access to various equal loudness workflows, the ability to specify ratio in a frequency dependent manner, as well as a powerful sidechain high-pass filter allowing continuously variable access over slope and frequency. The Yin/Yang functions allow manipulating the harmonic pattern produced during compression, and a new "insane" quality mode increases processing fidelity even further.

Kotelnikov does not try to emulate any previously available device. The concept is a proud digital processor, it is the original. 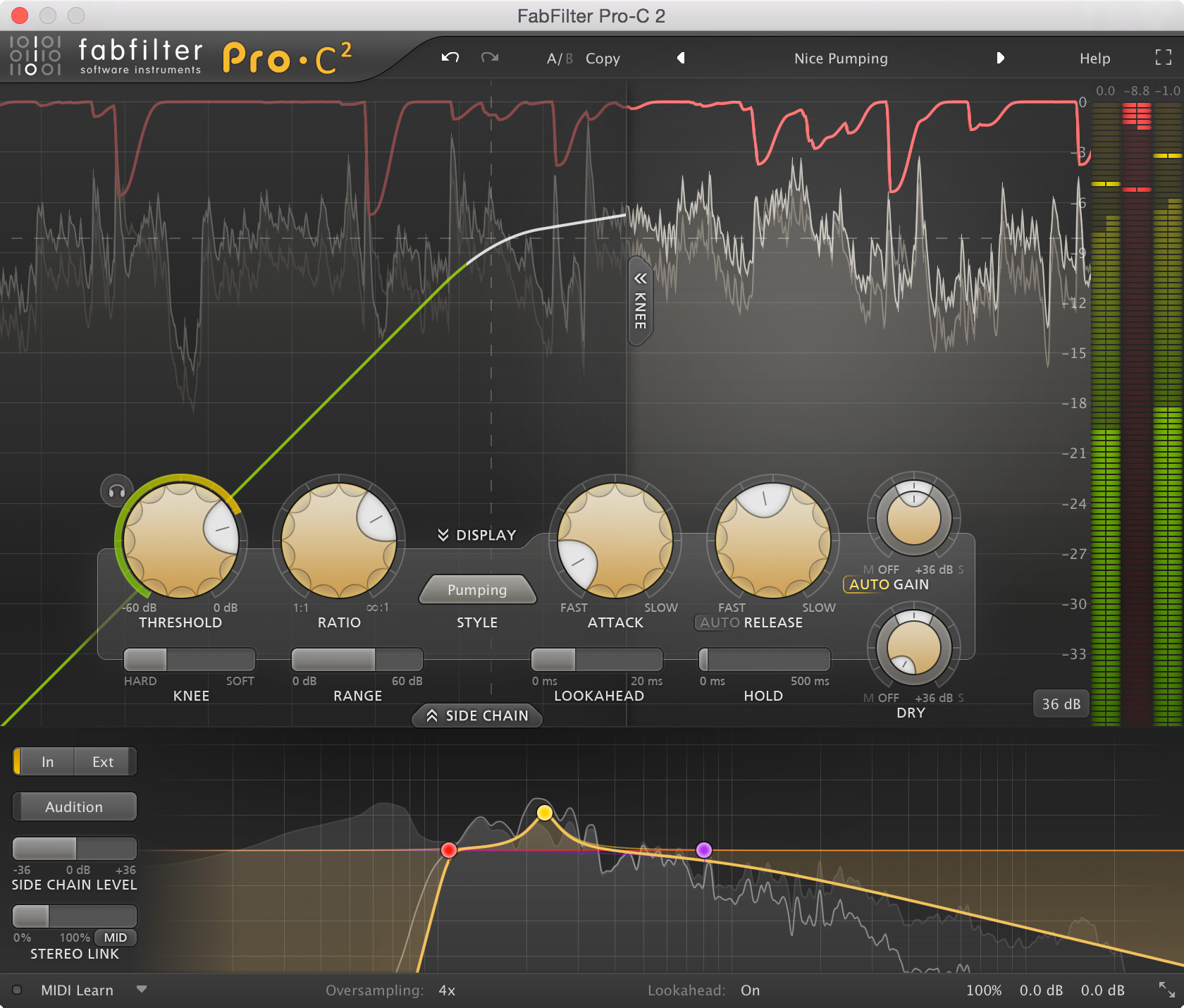 FabFilter Pro-C 2 is a major update to the FabFilter Pro-C compressor plug-in. Five brand-new compression styles make Pro-C 2 even easier to set up and more effective in common scenarios such as vocal processing, mastering or EDM pumping. It's like getting five new compressors. Together with an abundance of new features, such as lookahead, range, hold, side-chain EQ, oversampling, and a fully redesigned user interface, FabFilter Pro-C 2 surpasses its predecessor in every way while respecting the original's transparency and elegance.

FabFilter Pro-C 2 introduces five new, carefully designed compressor algorithms, each with a unique character and feel. Using the Vocal style, getting a lead vocal upfront in your mix is as easy as choosing the right threshold. The Mastering style is designed to be as transparent as possible, while still being able to catch those fast transients. To add a pleasant 'glue' to drums or mix buses, the Bus style will work wonders. Finally, the Punch style delivers traditional, analog-like compression behavior, which sounds good on anything, while the Pumping algorithm offers deep and over-the-top pumping — great for drum processing or EDM.

A rich set of new features offers more control over the compressor's sound and character. The knee is now freely adjustable from 0 dB up to 72 dB, and the range setting lets you easily limit the maximum amount of gain change. The smooth lookahead (up to 20 ms) and hold settings help you to catch any peak while minimizing distortion. The optional high-quality oversampling (up to 4x) further ensures the most transparent results possible by reducing aliasing. Last but not least, advanced side-chain EQ'ing and M/S processing is easier than ever thanks to Pro-C 2's dedicated side-chain section.

It took almost two years of extensive research and development to create MJUC, analyzing multiple variable-mu implementations to get the best of tube compression into a single processor. In order to do the diversity of this compression topology justice, three different models have been built. These are kind of a time travel though the history of tube compression to capture the essence of each generation. Each model has its own dedicated signal path and dedicated control set. If desired you can tweak the overall tone and saturation of each model with the unique TIMBRE and the DRIVE control. DRIVE controls the load of the input and output transformers as the saturation of the tube gain stages, if applicable. The TIMBRE extends MJUC's use as a tone shaping device.

MJUC is the first Klanghelm plugin, that's built with the help of a new framework, bringing a lot of new usability features such as GUI-resizing, AB-ing and a feature-rich platform independent preset browser with save/copy/paste/save-as-default functionality. Furthermore it's possible to tweak the knob behavior, enable tooltips, show/hide value labels and more.

Model Mk1 is based on the very early variable-mu designs from the 50s. and is the most colored of MJUC's models. Model Mk2 is built upon the more complex designs of the 175 and 176 from the early 1960s, the all-tube-predecessors of the classic 1176 FET compressor. Model Mk3 is the least colored and most Hi-Fi-sounding model in MJUC.

CLA Classic Compressors is a collaboration between Waves and Chris Lord-Alge that brings you models of four compressors considered true classics by audio engineers the world over: CLA-2A, CLA-3A, CLA-76 Blacky and CLA-76 Bluey.

CLA-2A - Compressor / Limiter
Modeled on the legendary electro-optical tube compressor, the CLA-2A emulates the original's smooth, frequency-dependent behaviors that have made it a favorite of engineers everywhere. Like the mid-'60s classic, the CLA-2A sounds great on guitars and bass, and really shines on vocals, according to Waves. It's topped off with Chris Lord-Alge's personal presets.