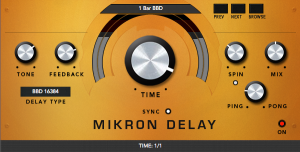 112dB has announced the release of Mikron Delay, an audio effect for Windows and Mac.

Mikron Delay has been inspired by the classic bucket brigade delays and tape delays of the past. It is not an emulation of one of those classics in particular, but tries to capture the spirit of these devices: the secret ingredients that make those old school devices sound so fantastic.

Mikron Delay is available for Windows and Mac (VST/AU/AAX) for the price of $39. An introductory price of $29 is valid until December 31st, 2017.