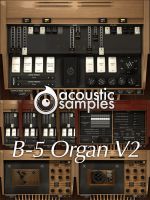 Acousticsamples has announced the release of Version 2 of the B-5 Organ. They say it's not a simple update, it's an entirely new product. They reworked both the sound generation and the Leslie simulation, here are a few of the new features.

A new Leslie emulation
Acousticsamples have been working with UVI again and provided them with a lot of measurements on their Leslie 122. UVI came up with a new Leslie Emulation, and Acousticsamples adjusted it even further to fit the sound of the different Leslie models they recorded. You now get the sound of the Leslie 122, 147 or 3300 and all of them with a variety of microphone placements and many controls over them.

A refined Organ model
Everything has been revised, the click sound, the measurement of the real voicing, the percussion curves and Acousticsamples simulated a few real electrical behaviors like the voltage stealing and the loudness robbing that play a very important part in the sound of the organs. And as every B-3, C-3 or A-100 is unique, Acousticsamples now offer 4 different organ base tones, each with their own voicing and signature sound.

A completely reworked Tube Saturation
The tube saturation now follows the exact behavior of the real Leslie 122 tube saturation. There is basically one main control that is similar to the volume knob you can find on a 122 and you can play with the volume pedal to get more or less saturation while playing.

A complete MIDI integration
Acousticsamples pre-mapped some of the most used Organ controllers like the XK series, the Clavia controllers (Nord stage, C series, electro and C2D), the Mojo, the B4D, the HX3 and a few others. If your controller is not in that list, just use the new MIDI learn function to assign any element to the controller of your choice.

A much better Pedalboard simulation
Acousticsamples have modeled 4 different pedalboards for which each drawbar controls a certain frequency combination. The voicings really vary a lot from one model to another.

A new preset system
Acousticsamples decided to add the two main presets for A# and B that control two virtual sets of drawbars. They also added a new general preset system with a few built-in presets to help you explore different sounds.

Watch Acousticsamples B-5 vs real Organ and Leslie Video

Listen to the new SoundCloud demos

If you already own the B-5, then this "update" is free, just download the new file from the download page in your account (the file B-5-Organ-v2-EDC.rar) and update UVI Workstation to the latest version (2.6.10). Falcon is not yet compatible, but it will be when the next version is released by UVI.

Find B-5 Organ in the KVR Marketplace