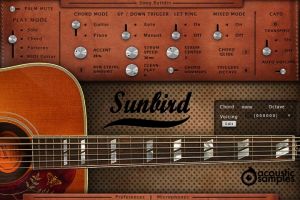 Acousticsamples has announced the release of Sunbird, a sample library based on a 1962 Gibson Humming acoustic guitar, for the free UVI Workstation.

The HummingBird guitar was created in 1960 by Gibson and was the first square-shouldered dreadnought. It was designed to be extremely versatile so that it can cover many music genres and have a deep tone without being too powerful, which is ideal to accompany a voice.

It is in this spirit that it was sampled. Together with a powerful strum, pattern and song engine, the Sunbird library is a great tool to create accompaniments.

You can learn more about the Sunbird, listen to audio demos and watch the presentation video on the Sunbird page.

The Sunbird library is available now for 119€ / 149$ at www.acousticsamples.net

Find Sunbird in the KVR Marketplace