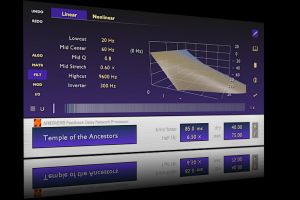 Ariescode has updated AriesVerb to version 0.7.7, a platform update. With this version, AriesVerb is now available for 32-bit and 64-bit architectures, on both the macOS and Windows platforms.

The system requirements have changed: It is now required to have at least macOS 10.6 or Windows Server 2003. Running AriesVerb under Windows XP may work for you, but has become officially unsupported.

A number of fixes and improvements also made it into this version. The most important one is an issue that would cause the operating system to activate the discrete graphics adapter on any MacBook that has one, draining battery life. This is fixed now with version 0.7.7.

Another nuisance was the lack of output clipping when no feedback exists. Feedback clipping has always existed in AriesVerb, but some settings (notably 'Cassette Recorder Dynamics') may produce large amplitudes even though they don't use feedback, causing some hosts to auto-mute the plugin. This has also been fixed.

Other improvements are detailed in the release notes. There are 11 new presets, and also many legacy presets (dating from the AriesVerb alpha version) have been revised and moved into the main library. The total number of presets now stands at 220.