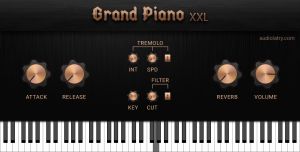 The original samples (Creative Commons Attribution 3.0 license) were recorded by Alexander Holm with two AKG c414 condenser microphones placed in an AB position at around 12 centimeters above the strings.

All the samples were captured in 48kHz 24-bit audio quality with 16 velocity layers which are all present in this virtual plugin, hence the 1.19 GB size on disk. The keys release samples are also added in Grand Piano XXL.

The GUI contains typical controls such as attack & release, gain, "Tremolo" section with LFO rate & depth for pitch, expression and pan, plus filter cutoff with selectable lowpass/highpass. The "Key" knob is the gain for piano keys release. For more sound depth, a simple reverb module was added.