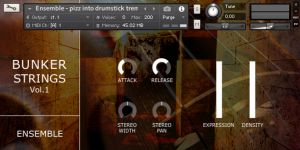 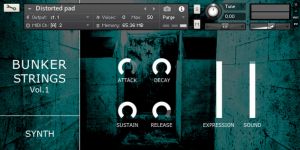 Bunker Samples has announced the release of Bunker Strings Vol. 1 for Kontakt, which they say offers a new approach to string textures.

Conceived and recorded deep underground in a World War II bunker in Copenhagen, Bunker Strings Vol. 1 is a collection of eclectic, modern and highly playable string textures and extended techniques. Featuring violins, violas, cellos, basses and a full ensemble patch playing innovative textural techniques such as drumstick tremolo, as well as some extremely tight and aggressive col legno shorts, this library aims to inspire your creativity and add a modern edge to your string writing. It's designed to easily blend with your existing strings sounds thanks to the dry recording quality and useful sound shaping controls directly on the interface. From soft, shimmering beauty to loud and bombastic, Bunker Strings is billed as "a great addition to any film, game and TV composer's toolkit".

Bunker Samples say Bunker Strings represents a new way of thinking about string texture sampling, because it lets you create dynamics and textural changes by literally changing the ensemble size on the fly with the density slider. Bunker Samples say this technique is only possible through the power of sampling, making this library a true virtual instrument in its own right, one that lets you add life and shape to normally static textures. All the longs articulations are available in normal and extra dense versions, giving you the versatility to use the library in anything from a chamber piece to an epic trailer. The combination patches takes this concept a step further, letting you seamlessly morph from one texture into another.

Bunker Strings also features short col legno notes, a very popular sound in film music. Normally played by tapping the strings with the wood of the bow, Bunker Samples went for a drumstick instead. The result is crisp and tight shorts that can go from soft and ticking along in the background, to a massive, thunderous "whack it as hard as you can". They add instant punch to your rhythmic writing, and blends really well with your existing string libraries, thanks to the dry recording space and useful controls for stereo image right on the interface. Best of all, the density slider also works on the shorts, letting you go from 3 to 9 players per note.

Bunker Strings is not a normal string library. The concept is unique and the sounds are raw and gritty, but can also be delicate and beautiful – and above all, this is a texture library you can actually play like an instrument. If you're looking to spice up your string writing and add a distinct modern edge to your sound arsenal, this is the library for you. As one of the demo writers summarised it: "insta-Jonny Greenwood".

Try before you buy

The original prototype for Bunker Strings, called "Scary Viola Pizz", is available free of charge and with no limitations, so you can try the concept before you buy. All you have to do is sign up for the Bunker Samples mailing list here.

For a limited time Bunker Strings Vol. 1 is available at a special introductory price of $39 (Reg. $59). Offer ends on March 8.