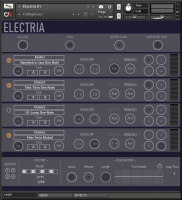 Channel Robot has announced the immediate release of Electria, a ROMpler engine for Kontakt (5.8.1+) inspired and using classic guitar sounds.

Electria is another innovative approach to using CR's 4-voice Recoil playback engine. Source material was obtained by sampling a range of classic guitars matched to a set of classic amplifiers.

The guitars used were:

Channel Robot sampled single notes, muted notes, major and minor chords for each guitar amp combination - resulting in 50 unique sample sets all focused on use in our 4-voice playback engine.

Electria's powerful 4-voice dual-channel engine offers you the sculpting and creative power to use 8 different sounds in your final playback:

Note: This IS NOT a guitar library - there are lots of articulations and approaches not included here - this is a sound design and sculpting tool, that uses classic guitar/amp combos as its source material.

Find Electria in the KVR Marketplace