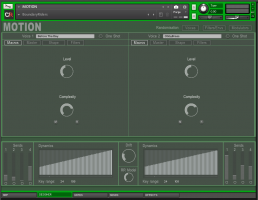 Channel Robot has released Motion for the full version of Kontakt 5.8.1+.

Motion includes over 500 different sample sets - each multi-sampled from instruments and sound sources carefully matched to the Profile Engine. Each sound is accessible through CR's Sound Browser, which allows users to define favorites and audition sounds on the fly. Users also get their oscillator-drift-modeling, infinite round-robin system as well as user defined dynamics for different playing styles.

Motion uses a dual-voice system, each voice is passed through the Profile Engine, a system that allows the user to draw shapes (profiles) for volume, pitch and pan for each voice. The profile engine then loops through these profiles for each note played, resulting in unique morphing and modulating output. The Profiles engine has further controls for loop speed (DAW tempo-synced) and in-voice play-back-model allowing even more control and interest. With this system it's possible to quickly build moving pad sounds, risers, doppler-effects, pitch modulators, glitch sounds and more.

But CR know that for most users time-is-money so Motion includes a simple macros page to allow users to quickly get to new and interesting ever-changing output. Add to these controls a set of envelopes, vibrato, tremolo and filter controls for classic synth-like sound sculpting.

CR also included their independent one-to-one modulation system; users define a set of modulation-profiles and Motion will move through these in a tempo synced to the host DAW, retrigger, one-shot and random are all included. This powerful modulation system further allows users to warp, twist and bend the output.

Motion comes with over 140 snapshots and includes nearly 6,500 samples(nearly 9 GB of 24-bit compressed audio) in over 300 instruments.