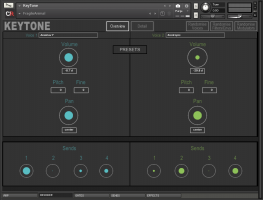 Channel Robot has announced the immediate release of KeyTone for the full version of Kontakt 5.8.1+.

Keytone is a dual voice keyboard sounds ROMpler. Channel Robot's starting point was that the world doesn't need another multi-gig multi-sampled grand piano ROMpler, nor does it need more Rhodes or Wurlitzer instruments. Those bases are pretty much covered. Instead they wanted to make a quick and easy-to-use ROMpler that would let you define your own unique piano/keys sounds.

There are the over 200 instruments sampled and included in KeyTone. These were meticulously recorded, edited and mastered using Channel Robot's analogue valve based system, including passing each sound through a dedicated 1970s Akai valve pre-amp and then copying everything through a Revox B77 tape machine loaded with vintage (but pristine) British Zonal 675 tape. A long, slow process.

Channel Robot added the all-new Overview tab so getting to the most important controls is quick and easy, but they kept all the detailed control in KeyTone, with "classic" synthesis controls, like envelopes and filters, for sculpting and shaping modern innovative and original sounds quickly and efficiently. You can find these in the Detail tab. On top of these controls KeyTone comes with over 100 snapshots of full-instrument sounds, as well as over 100 voice-presets, 30 gate presets, and 50 ARP presets.

Find KeyTone in the KVR Marketplace