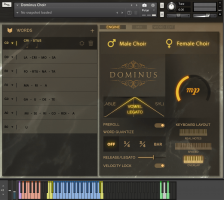 Dominus Choir is made with two choirs from Italy, the female choir "La Rose" and the male choir "Novecento", and sampled in the same hall where Rinascimento was produced.

The basic idea was to create a choir library able to perform rich musical lines with an intuitive interface. The way the engine works resembles the ancient game of Dominoes where you connect the different tiles according to their value. Dominus utilizes an engine which intelligently connects the different syllables by the vowels that both precede and follow the consonants.

In addition to this, Dominus features true-legato transitions for all the vowels in the library, capable of dealing with movements from the softest to the strongest dynamics, and, an intuitive poly legato engine that simply works as it should.