The Red 16Line features ultra-low latency A-D/D-A conversion for 16 line level ins and outs and for two Red Evolution mic preamps, up to 121dB dynamic range and expansion over Ethernet for networked audio. Since Red 16Line provides both DigiLink connectors and Thunderbolt connections, it's now easier than ever to switch from Pro Tools | HD to other audio applications, without the need to reconfigure option cards in the interface. The host mode can be simply changed either in the remote control software, or on the device front panel to change DAWs in seconds.

High-performance audio converters with over 118dB dynamic range for A/D and 121dB dynamic range for D/A (A-weighted) have been implemented to provide the best balance of sound quality, dynamic range and conversion latency in Focusrite's best-quality audio interface. Red's ultra-low round trip latency completely transforms workflows. For those used to having to build two different mixes – one using input monitoring to overdub, the other using the DAW for playback – the good news is that now, one is enough. Mixes can be built on the DAW and used whether overdubbing (monitoring the input being recording with the Focusrite Control software mixer) or playing back, with all plug-ins in place, all the time.

Red 16Line features 16 line inputs on D-sub, coupled with 16 line outputs and two main monitor outputs, and the outputs can be ganged for surround monitoring applications. The two digitally-controlled Red Evolution mic preamps provide up to 63dB of ultra-clean gain along with stereo linking, individually switchable phantom power, high-pass filter, phase reverse and Air mode (the name Focusrite gives to the sonic signature of the classic transformer ISA preamp). With a dual-port Dante card, studios will be able to be expanded over Ethernet for more channels at higher sample rates, anywhere in the network, at lower latency and lower cost. 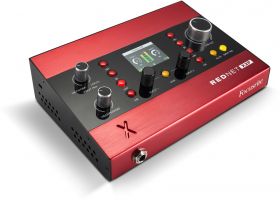 RedNet X2P features a crossfader to enable level control of the local inputs versus network inputs assigned to feed either the line outputs or the headphone outputs. The unit can be mounted directly to a mic stand, keeping it out of the way and within reach.

Flexible control locks enable local control of mic pre settings and output settings, or both to be locked. Artists can adjust their headphone mix and level, safe in the knowledge that they cannot accidentally adjust the mic pre gain.

Release dates and pricing have not yet been announced.